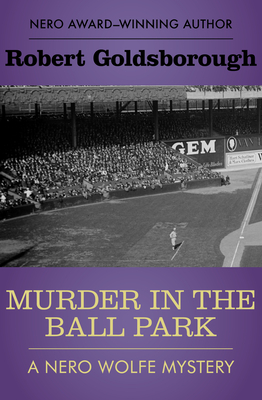 This is book number 9 in the Nero Wolfe Mysteries series.

A killer hiding among the crowd at a Dodgers-Giants game forces Nero Wolfe to step up to the plate in this "superb" mystery (Publishers Weekly, starred review).
Archie Goodwin and Saul Panzer have ventured into the wilds of northern Manhattan to watch the Giants take on the Dodgers at the Polo Grounds. The national anthem is just winding down when Panzer spies a notable in the box seats: state senator Orson Milbank, a silver-haired scoundrel with enemies in every corner of upstate New York. In the fourth inning, a monstrous line drive brings every fan in the grandstand to his feet--every fan save for one silver-haired senator, who has been shot dead by a sniper in the upper deck.
Archie's employer--the rotund genius Nero Wolfe--has no interest in investigating the stadium slaying, but Archie is swayed by the senator's suspiciously lovely widow. Her husband was mired hip-deep in corruption, and sorting out who killed him will be a task far less pleasant than an afternoon at the ball park.
Robert Goldsborough (b. 1937) is an American author best known for continuing Rex Stout's famous Nero Wolfe series. Born in Chicago, he attended Northwestern University and upon graduation went to work for the Associated Press, beginning a lifelong career in journalism that would include long periods at the Chicago Tribune and Advertising Age. While at the Tribune, Goldsborough began writing mysteries in the voice of Rex Stout, the creator of iconic sleuths Nero Wolfe and Archie Goodwin. Goldsborough's first novel starring Wolfe, Murder in E Minor (1986), was met with acclaim from both critics and devoted fans, winning a Nero Award from the Wolfe Pack. Nine more Wolfe mysteries followed, including Death on Deadline (1987) and Fade to Black (1990). His most recent book is Archie in the Crosshairs (2015).