Educated for Freedom: The Incredible Story of Two Fugitive Schoolboys Who Grew Up to Change a Nation (Paperback) 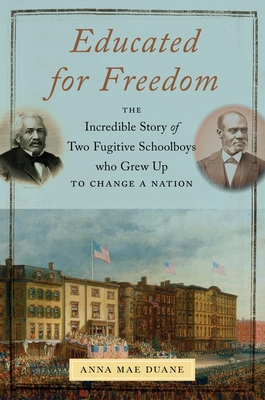 Educated for Freedom: The Incredible Story of Two Fugitive Schoolboys Who Grew Up to Change a Nation (Paperback)

In the 1820s, few Americans could imagine a viable future for black children. Even abolitionists saw just two options for African American youth: permanent subjection or exile. Educated for Freedom tells the story of James McCune Smith and Henry Highland Garnet, two black children who came of age and into freedom as their country struggled to grow from a slave nation into a free country. Smith and Garnet met as schoolboys at the Mulberry Street New York African Free School, an educational experiment created by founding fathers who believed in freedom's power to transform the country. Smith and Garnet's achievements were near-miraculous in a nation that refused to acknowledge black talent or potential. The sons of enslaved mothers, these schoolboy friends would go on to travel the world, meet Revolutionary War heroes, publish in medical journals, address Congress, and speak before cheering crowds of thousands. The lessons they took from their days at the New York African Free School #2 shed light on how antebellum Americans viewed black children as symbols of America's possible future. The story of their lives, their work, and their friendship testifies to the imagination and activism of the free black community that shaped the national journey toward freedom.
Anna Mae Duane is Associate Professor of English and director of the American Studies Program at the University of Connecticut