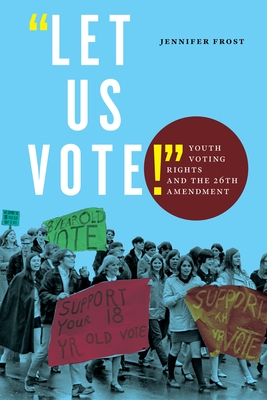 "Let Us Vote " tells the story of the multifaceted endeavor to achieve youth voting rights in the United States. Over a thirty-year period starting during World War II, Americans, old and young, Democrat and Republican, in politics and culture, built a movement for the 26th Amendment to the US Constitution, which lowered the voting age from twenty-one to eighteen in 1971. This was the last time that the United States significantly expanded voting rights. Jennifer Frost deftly illustrates how the political and social movements of the time brought together bipartisan groups to work tirelessly in pursuit of a lower voting age. In turn, she illuminates the process of achieving political change, with the convergence of "top-down" initiatives and "bottom-up" mobilization, coalition-building, and strategic flexibility. As she traces the progress toward achieving youth suffrage throughout the '60s, Frost reveals how this movement built upon the social justice initiatives of the decade and was deeply indebted to the fight for African American civil and voting rights. 2021 marks the fiftieth anniversary of this important constitutional amendment and comes at a time when scrutiny of both voting age and voting rights has been renewed. As the national conversation around climate crisis, gun violence, and police brutality creates a new call for a lower voting age, "Let Us Vote " provides an essential investigation of how this massive political change occurred, and how it could be brought about again.
Jennifer Frost is Associate Professor of History at the University of Auckland in New Zealand, and author of "An Interracial Movement of the Poor" Community Organizing and the New Left in the 1960s, Hedda Hopper's Hollywood: Celebrity Gossip and American Conservativism, and Producer of Controversy: Stanley Kramer, Hollywood Liberalism, and the Cold War.