The Secular Paradox: On the Religiosity of the Not Religious (Secular Studies #5) (Paperback) 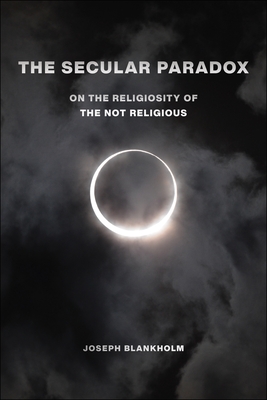 The Secular Paradox: On the Religiosity of the Not Religious (Secular Studies #5) (Paperback)

For much of America's rapidly growing secular population, religion is an inescapable source of skepticism and discomfort. It shows up in politics and in holidays, but also in common events like weddings and funerals. In The Secular Paradox, Joseph Blankholm argues that, despite their desire to avoid religion, nonbelievers often seem religious because Christianity influences the culture around them so deeply. Relying on several years of ethnographic research among secular activists and organized nonbelievers in the United States, the volume explores how very secular people are ambivalent toward belief, community, ritual, conversion, and tradition. As they try to embrace what they share, secular people encounter, again and again, that they are becoming too religious. And as they reject religion, they feel they have lost too much. Trying to strike the right balance, secular people alternate between the two sides of their ambiguous condition: absolutely not religious and part of a religion-like secular tradition. Blankholm relies heavily on the voices of women and people of color to understand what it means to live with the secular paradox. The struggles of secular misfits--the people who mis-fit normative secularism in the United States--show that becoming secular means rejecting parts of life that resemble Christianity and embracing a European tradition that emphasizes reason and avoids emotion. Women, people of color, and secular people who have left non-Christian religions work against the limits and contradictions of secularism to create new ways of being secular that are transforming the American religious landscape. They are pioneering the most interesting and important forms of secular "religiosity" in America today.
Joseph Blankholm is Assistant Professor of Religious Studies at the University of California, Santa Barbara.