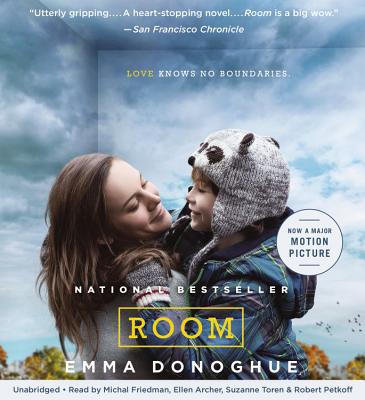 “Room is like no other book I have ever read. This emotionally powerful story of young Jack and his mother who are held in captivity for seven years is both a heart-wrenching testament to the power of the love between a mother and child and a riveting story of overcoming horrible circumstances. Emma Donohue has written one of those rare books that you will remember reading your entire life, as you will be altered by the experience.”
— Lanora Hurley, Next Chapter Bookshop, Mequon, WI

“Room is like no other book I have ever read. This emotionally powerful story of young Jack and his mother, held in captivity for seven years, is both a heart wrenching testament to the power of the love between a mother and child and a riveting story of overcoming horrible circumstances. Emma Donohue has written one of those rare books that you will remember reading your entire life, as you will be altered by the experience.”
— Lanora Hurley, Next Chapter Bookshop, Mequon, WI

Held captive for years in a small shed, a woman and her precocious young son finally gain their freedom, and the boy experiences the outside world for the first time.

To five-year-old-Jack, Room is the world. . . . It's where he was born, it's where he and his Ma eat and sleep and play and learn. At night, his Ma shuts him safely in the wardrobe, where he is meant to be asleep when Old Nick visits.

Room is home to Jack, but to Ma it's the prison where she has been held for seven years. Through her fierce love for her son, she has created a life for him in this eleven-by-eleven-foot space. But with Jack's curiosity building alongside her own desperation, she knows that Room cannot contain either much longer.

Room is a tale at once shocking, riveting, exhilarating -- a story of unconquerable love in harrowing circumstances, and of the diamond-hard bond between a mother and her child.
Born in Dublin in 1969, Emma Donoghue is an Irish emigrant twice over: she spent eight years in Cambridge doing a PhD in eighteenth-century literature before moving to London, Ontario, where she lives with her partner and their two children. She also migrates between genres, writing literary history, biography, stage and radio plays as well as fairy tales and short stories.

She is best known for her novels, which range from the historical (Frog Music, Slammerkin, Life Mask, Landing, The Sealed Letter) to the contemporary (Akin, Stir-Fry, Hood, Landing). Her international bestseller Room was a New York Times Best Book of 2010 and was a finalist for the Man Booker, Commonwealth, and Orange Prizes.
"A riveting, powerful novel....Donoghue's inventive storytelling is flawless and absorbing. She has a fantastic ability to build tension in scenes where most of the action takes place in the 12-by-12 room where her central characters reside. Her writing has pulse-pounding sequences that cause the reader's eyes to race over the pages to find out what happens next....Room is likely to haunt readers for days, if not longer. It is, hands down, one of the best books of the year."—Liz Raftery, Boston Globe

"Remarkable....Jack's voice is one of the pure triumphs of the novel: in him, she has invented a child narrator who is one of the most engaging in years - his voice so pervasive I could hear him chatting away during the day when I wasn't reading the book....This is a truly memorable novel, one that can be read through myriad lenses - psychological, sociological, political. It presents an utterly unique way to talk about love, all the while giving us a fresh, expansive eye on the world in which we live."—Aimee Bender, New York Times Book Review

"Only a handful of authors have ever known how to get inside the mind of a child and then get what they know on paper. Henry James, Mark Twain, William Faulkner, and, more recently, Jean Stafford and Eric Kraft come to mind, and after that one gropes for names. But now they have company. Emma Donoghue's latest novel, Room, is narrated by a 5-year-old boy so real you could swear he was sitting right beside you.... Room is so beautifully contrived that it never once seems contrived. But be warned: once you enter, you'll be Donoghue's willing prisoner right down to the last page."—Malcolm Jones, Newsweek

"I loved Room. Such incredible imagination, and dazzling use of language. And with all this, an entirely credible, endearing little boy. It's unlike anything I've ever read before."—Anita Shreve, author of The Pilot's Wife and A Change in Altitude

"A novel so disturbing that we defy you to stop thinking about it, days later."—Sara Nelson, O Magazine

"Riveting....Such a story, such a mother!....[Donoghue] gracefully distills what it means to be a mother--and what it's like for a child whose entire world measures just 11 x 11."—Lisa Schwarzbaum, Entertainment Weekly

"Room is that rarest of entities, an entirely original work of art. I mean it as the highest possible praise when I tell you that I can't compare it to any other book. Suffice to say that it's potent, darkly beautiful, and revelatory."—Michael Cunningham, author of The Hours and By Nightfall

"One of the most affecting and subtly profound novels of the year."—Ron Charles, Washington Post

"Utterly gripping.... Room is right up there with Alice Sebold's The Lovely Bones and Jacquelyn Michard's The Deep End of the Ocean."—Heller McAlpin, San Francisco Chronicle

"Emma Donoghue's writing is superb alchemy, changing innocence into horror and horror into tenderness. Room is a book to read in one sitting. When it's over you look up: the world looks the same but you are somehow different and that feeling lingers for days."—Audrey Niffenegger, author of The Time Traveler's Wife and Her Fearful Symmetry