And the Good News Is...: Lessons and Advice from the Bright Side (CD-Audio) 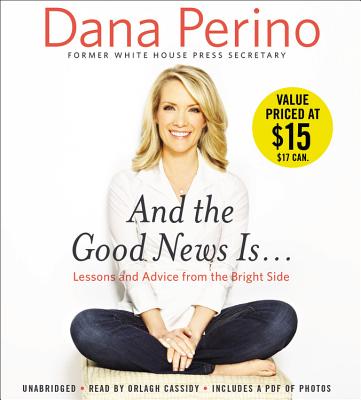 And the Good News Is...: Lessons and Advice from the Bright Side (CD-Audio)


Special Order—Subject to Availability
From her years as the presidential press secretary to her debates with colleagues on Fox News' The Five, Dana Perino reveals the lessons she's learned that have guided her through life, kept her level-headed, and led to her success, even in the face of adversity.

Thoughtful, inspiring, and often surprising, And the Good News is . . . traces Dana Perino's unlikely journey through politics and television. It's a remarkable American story-made up of equal parts determination and clear-eyed optimism.

From facing professional challenges and confronting personal fears to stepping up to a podium for a President, Dana has come to expect the unexpected and has an uncanny ability to find the good news in any tough situation. And the Good News is . . . takes us from her Western childhood in Wyoming and Colorado to a chance meeting on an airplane that changes her life entirely. Then, with refreshing honesty and humor, she recounts her frustration with a string of unsatisfying jobs and living circumstances until a key career tip leads her back to Washington, D.C. to work for the Bush Administration.

Dana also shares here her best work and life lessons-tips that will help you to get your point across convincingly while allowing your own grace and personality to shine through. As someone who still believes in working together to solve the problems our nation faces, Dana offers clear, practical advice on how to restore civility to our personal and public conversations. The result is a fascinating read that can help anyone become more successful, productive, and joyously content.
Dana Perino is a Fox News Contributor and co-host of one of the most popular shows on cable television, The Five. Perino was the first Republican woman to serve as the White House Press Secretary and served for over seven years in the administration of George W. Bush, including at the Department of Justice after the terrorist attacks on 9/11. Perino lives in Manhattan with her husband, Peter McMahon, and their dog, Jasper.