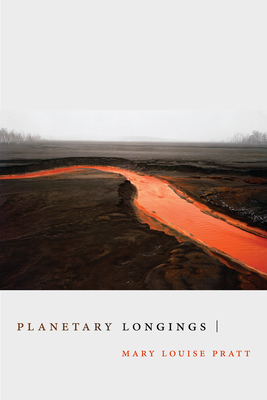 
Not On Our Shelves—Ships in 1-5 Days
In Planetary Longings eminent cultural theorist Mary Louise Pratt posits that the last decade of the twentieth century and the first decades of the twenty-first mark a turning point in the human and planetary condition. Examining the forces of modernity, neoliberalism, coloniality, and indigeneity in their pre- and postmillennial forms, Pratt reflects on the crisis of futurity that accompanies the millennial turn in relation to environmental disaster and to the new forms of thinking it has catalyzed. She turns to 1990s Latin American vernacular culture, literary fiction, and social movements, which simultaneously registered neoliberalism's devastating effects and pursued alternate ways of knowing and living. Tracing the workings of colonialism alongside the history of anticolonial struggles and Indigenous mobilizations in the Americas, Pratt analyzes indigeneity both as a key index of coloniality, neoliberal extraction, and ecological destruction, and as a source for alternative modes of thought and being. Ultimately, Pratt demonstrates that the changes on either side of the millennium have catalyzed new forms of world-making and knowledge-making in the face of an unknowable and catastrophic future.
Mary Louise Pratt is Silver Professor, Emerita, of Spanish and Portuguese and Social and Cultural Analysis at New York University and Olive H. Palmer Professor in the Humanities, Emerita, at Stanford University. She is coeditor of Trumpism, Mexican America, and the Struggle for Latinx Citizenship and author of Imperial Eyes: Travel Writing and Transculturation.