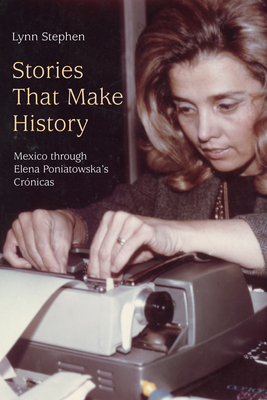 
Not On Our Shelves—Ships in 1-5 Days
From covering the massacre of students at Tlatelolco in 1968 and the 1985 earthquake to the Zapatista rebellion in 1994 and the disappearance of forty-three students in 2014, Elena Poniatowska has been one of the most important chroniclers of Mexican social, cultural, and political life. In Stories That Make History, Lynn Stephen examines Poniatowska's writing, activism, and political participation, using them as a lens through which to understand critical moments in contemporary Mexican history. In her cr nicas--narrative journalism written in a literary style featuring firsthand testimonies--Poniatowska told the stories of Mexico's most marginalized people. Throughout, Stephen shows how Poniatowska helped shape Mexican politics and forge a multigenerational political community committed to social justice. In so doing, she presents a biographical and intellectual history of one of Mexico's most cherished writers and a unique history of modern Mexico.
Lynn Stephen is Philip H. Knight Chair, Distinguished Professor of Arts and Sciences, Professor of Anthropology, and graduate faculty in Indigenous, Race, and Ethnic Studies at the University of Oregon. She is the author or editor of fourteen books, including We Are the Face of Oaxaca: Testimony and Social Movements, also published by Duke University Press, and most recently coeditor of Indigenous Women and Violence: Feminist Activist Research in Heightened States of Injustice.