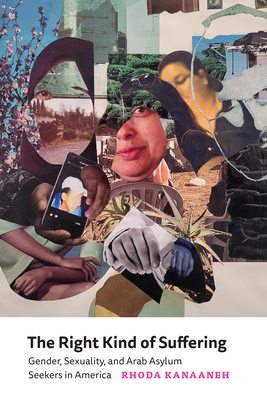 From the overloaded courts with their constantly changing dates and appointments to the need to prove oneself the “right” kind of victim, the asylum system in the United States is an exacting and drawn-out immigration process that itself results in suffering. When anthropologist Rhoda Kanaaneh became a volunteer interpreter for Arab asylum seekers, she learned how applicants were pushed to craft specific narratives to satisfy the system’s requirements.

Kanaaneh tells the stories of four Arab asylum seekers who sought protection in the United States on the basis of their gender or sexuality: Saud, who relived painful memories of her circumcision and police harassment in Sudan and then learned to number and sequence these recollections; Fatima, who visited doctors and therapists in order to document years of spousal abuse without over-emphasizing her resulting mental illness; Fadi, who highlighted the homophobic motivations that provoked his arrest and torture in Jordan, all the while sidelining connected issues of class and racism; and Marwa, who showcased her private hardships as a lesbian in a Shiite family in Lebanon and downplayed her environmental activism. The Right Kind of Suffering is a compelling portrait of Arab asylum seekers whose success stories stand in contrast with those whom the system failed.

Rhoda Kanaaneh has taught anthropology and gender and sexuality studies at Columbia University, American University, and New York University. She is the editor of Displaced at Home: Ethnicity and Gender Among Palestinians in Israel and author of Surrounded: Palestinian Soldiers in the Israeli Military and Birthing the Nation: Strategies of Palestinian Women in Israel, and other books on the Middle East.

Rhoda Kanaaneh’s scholarship is extremely nuanced and is a model for ethically engaged and sensitive research. Not only are her subjects interlocuters for her intellectual curiosity, but she also engages them as an advocate, translator, community service volunteer, fellow human, and even friend. This is laudable and represents the best of anthropological engagement with the world. The book will resonate deeply with many readers and put a mirror to their own experiences of migration and social recognition.
— Sa'ed Atshan, author of Queer Palestine and the Empire of Critique

Rhoda Kanaaneh is an incredibly skilled writer who shows that to live a life in legal precarity requires tremendous resilience not only to cope with challenges such as extreme financial hardship, isolation, homelessness, and depression, but to persist during the lengthy asylum process. The Right Kind of Suffering thinks about the manner in which the War on Terror, anti-Muslim sentiments, and increasing border securitization affect the 'success' of refugee protection for asylum claimants with Muslim backgrounds whose cases touch on different challenges in the area of gender and sexuality.
— Mengia Tschalaer, author of Muslim Women's Quest for Justice: Gender, Law and Activism in India