Comin' Right at Ya: How a Jewish Yankee Hippie Went Country, or, the Often Outrageous History of Asleep at the Wheel (Brad and Michele Moore Roots Music Series) (Paperback) 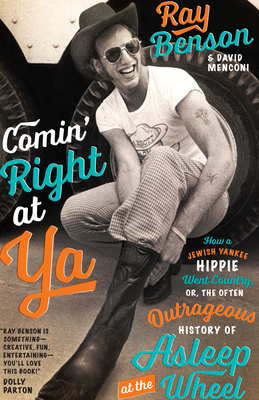 Comin' Right at Ya: How a Jewish Yankee Hippie Went Country, or, the Often Outrageous History of Asleep at the Wheel (Brad and Michele Moore Roots Music Series) (Paperback)

A who’s who of American popular music fills this lively memoir, in which Ray Benson recalls how a Philadelphia Jewish hippie and his bandmates in Asleep at the Wheel turned on generations of rock and country fans to Bob Wills–style Western swing.

A six-foot-seven-inch Jewish hippie from Philadelphia starts a Western swing band in 1970, when country fans hate hippies and Western swing. It sounds like a joke but—more than forty years, twenty-five albums, and ten Grammy Awards later—Asleep at the Wheel is still drawing crowds around the world. The roster of musicians who’ve shared a stage with the Wheel is a who’s who of American popular music—Van Morrison, Willie Nelson, Dolly Parton, Emmylou Harris, George Strait, Vince Gill, Lyle Lovett, and so many more. And the bandleader who’s brought them all together is the hippie that claimed Bob Wills’s boots: Ray Benson.

In this hugely entertaining memoir, Benson looks back over his life and wild ride with Asleep at the Wheel from the band’s beginning in Paw Paw, West Virginia, through its many years as a Texas institution. He vividly recalls spending decades in a touring band, with all the inevitable ups and downs and changes in personnel, and describes the making of classic albums such as Willie and the Wheel and Tribute to the Music of Bob Wills and the Texas Playboys. The ultimate music industry insider, Benson explains better than anyone else how the Wheel got rock hipsters and die-hard country fans to love groovy new-old Western swing. Decades later, they still do.

Ray Benson cofounded Asleep at the Wheel in 1970 and is the only remaining original band member. When he isn’t playing with the Wheel, he’s producing records, TV shows, and commercials; acting in movies; doing voice-over work; running a studio; and raising funds for numerous charities. He was named “Official Texas State Musician” in 2004 and “Texan of the Year” in 2011.

A former contributing editor for No Depression magazine, David Menconi has been the music critic at the Raleigh News & Observer since 1991. He is the author of Ryan Adams: Losering, a Story of Whiskeytown and coeditor of the American Music Series for the University of Texas Press.

A pleasure for fans of Benson and the band.
— Kirkus Reviews

Benson has a treasure trove of outlandish anecdotes, assorted nuggets of wisdom, and a deep and vast wealth of musical knowledge to share.
— PopMatters

The man is a trip, literally and figuratively . . . a real relaxin’ ride with a mellow fellow.
— Library Journal

Full of humor and humility and a truly iconoclast outlook on life . . .  since Benson started Asleep at the Wheel as a working-class country band, it's one helluva ride worth telling.
— Austin Chronicle

Asleep at the Wheel and country music fans will have trouble putting down this book, which barrels forward with all the energy of a Saturday night show at a dance hall in Austin. . . . Benson is the wily old veteran, spinning yarns and imparting wisdom learned from years on the road. We’d all be wise to listen.
— Jewish Book Council

In his own words, Benson reflects on the wild ride that's led him to where he is today.
— The Boot, "10 Best Country Music Books of 2022"