John Prine: In Spite of Himself (Paperback) 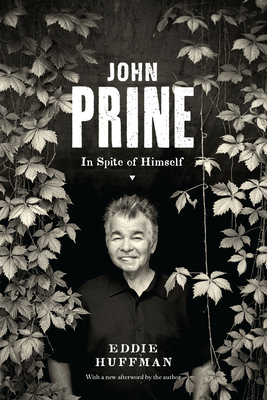 John Prine: In Spite of Himself (Paperback)

With a range that spans the lyrical, heartfelt songs “Angel from Montgomery,” “Sam Stone,” and “Paradise” to the classic country music parody “You Never Even Called Me by My Name,” John Prine is a songwriter’s songwriter. Across five decades, Prine has created critically acclaimed albums—John Prine (one of Rolling Stone’s 500 Greatest Albums of All Time), Bruised Orange, and The Missing Years—and earned many honors, including two Grammy Awards, a Lifetime Achievement Award for Songwriting from the Americana Music Association, and induction into the Nashville Songwriters Hall of Fame. His songs have been covered by scores of artists, from Johnny Cash and Miranda Lambert to Bette Midler and 10,000 Maniacs, and have influenced everyone from Roger McGuinn to Kacey Musgraves. Hailed in his early years as the “new Dylan,” Prine still counts Bob Dylan among his most enthusiastic fans.

In John Prine, Eddie Huffman traces the long arc of Prine’s musical career, beginning with his early, seemingly effortless successes, which led paradoxically not to stardom but to a rich and varied career writing songs that other people have made famous. He recounts the stories, many of them humorous, behind Prine’s best-known songs and discusses all of Prine’s albums as he explores the brilliant records and the ill-advised side trips, the underappreciated gems and the hard-earned comebacks that led Prine to found his own successful record label, Oh Boy Records. This thorough, entertaining treatment gives John Prine his due as one of the most influential songwriters of his generation.

Eddie Huffman, a regular contributor to the Greensboro (NC) News & Record and the Winston-Salem (NC) Journal, has written for Rolling Stone, the New York Times, Utne Reader, All Music Guide, Goldmine, the Virgin Islands Source, and many other publications.