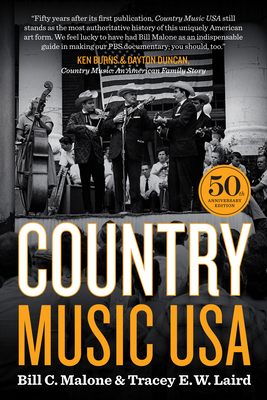 “Fifty years after its first publication, Country Music USA still stands as the most authoritative history of this uniquely American art form. Here are the stories of the people who made country music into such an integral part of our nation’s culture. We feel lucky to have had Bill Malone as an indispensable guide in making our PBS documentary; you should, too.”
—Ken Burns and Dayton Duncan, Country Music: An American Family Story

From reviews of previous editions:

“If anyone knows more about the subject than [Malone] does, God help them.”
—Larry McMurtry, from In a Narrow Grave

“Country Music USA is the definitive history of country music and of the artists who shaped its fascinating worlds.”
—William Ferris, University of North Carolina at Chapel Hill, former chairman of the National Endowment for the Humanities and coeditor of the Encyclopedia of Southern Culture

Since its first publication in 1968, Bill C. Malone’s Country Music USA has won universal acclaim as the definitive history of American country music. Starting with the music’s folk roots in the rural South, it traces country music from the early days of radio into the twenty-first century. In this fiftieth-anniversary edition, Malone, the featured historian in Ken Burns’s 2019 documentary on country music, has revised every chapter to offer new information and fresh insights. Coauthor Tracey Laird tracks developments in country music in the new millennium, exploring the relationship between the current music scene and the traditions from which it emerged.

Immersed in country music since his birth, Bill C. Malone has been both a scholar and a performer of the music for decades. On the fortieth anniversary of the publication of Country Music USA in 2008, he received a Lifetime Achievement Award from the Society for American Music. His other books include Don’t Get above Your Raisin’: Country Music and the Southern Working Class, Southern Music/American Music, and Sing Me Back Home: Southern Roots and Country Music.

Tracey E. W. Laird is the author or editor of four books, including Louisiana Hayride: Radio and Roots Music Along the Red River, Austin City Limits: A History and Austin City Limits: A Monument to Music, the latter coauthored with Brandon W. Laird. She is a professor of music at Agnes Scott College.

An important book. . . the first to tell the genre’s complete story, beginning with its folk, religious and early commercial origins — the ballads of the British Isles, the tent revivals, the 19th-century minstrel shows and the 1927 recording session in Bristol, Tennessee, that saw both Jimmie Rodgers and the Carter Family make their first recordings.
— Texas Observer

Country Music USA has been an authoritative and detailed history lesson and reference manual for country music, paralleled in quality and scope by few other works. It’s country music’s biography, starting with country’s very beginnings in primitive folk, and ranging all the way to the present day.
— Saving Country Music

[Country Music USA] was, and remains, a staggering work of scholarship that became a cornerstone of American music history—anyone writing seriously about country must reckon with it.
— Longreads

Malone's book provides a veritable treasure trove of information regarding the musicians, musical styles, and distribution networks (primarily the radio and phonograph recordings) of country music. . . Malone presents his readers with discrete insights into the particular musical acts that gave rise to and perpetuated the country music tradition in all of its internal contradictions, negotiations, and accommodations.
— PopMatters

If you've long been passionate about music, especially early country music's acoustic forms, Malone's books are a validation of your passion. They are also a retro road map of how the musicians and tunes that moved our souls arrived in our lives.
— Mandolin Café