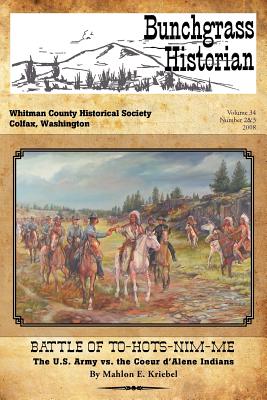 
Not On Our Shelves—Ships in 1-5 Days
(This book cannot be returned.)
Troops under the command of Col. Edward Steptoe left Fort Walla Walla, guided by several Nez Perce warriors, in the spring of 1858 to investigate the murder of two gold miners in the Fort Colville region a few miles north of the Spokane River. The Steptoe campaign had not anticipated any problems with the Indian Tribes living north of the Snake River. Col. Steptoe thought that he could intimidate the Coeur d'Alene Indians with a show of government force and didn't appreciate that he was riding through sovereign Indian lands. Chief Vincent, a Coeur d'Alene leader, was against war but was determined to provide security for his people. The Coeur d'Alene and Spokane Indians were digging camas roots at a spring encampment located at the western extent of Coeur d'Alene territory as the Steptoe Command marched on a trail leading directly into the encampment. Chief Vincent parlayed with Col. Steptoe three times before Steptoe agreed to return to Ft. Walla Walla. However, Palouse Indians who weren't part of the parlays began firing into the retreating troops, which resulted in a six mile running battle. Recently discovered Field Note Maps made by T. Kolecki during the Wright Campaign which followed Steptoe's crushing defeat identify camp sites, trails and battle details which explain the course of the events.