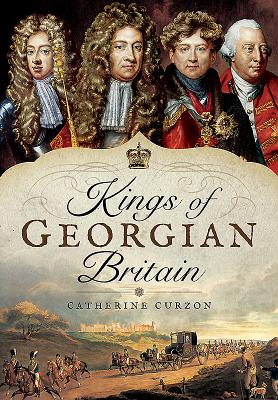 
Special Order—Subject to Availability
For over a century of turmoil, upheaval and scandal, Great Britain was a Georgian land. From the day the German-speaking George I stepped off the boat from Hanover, to the night that George IV, bloated and diseased, breathed his last at Windsor, the four kings had presided over a changing nation. Kings Georgian Britain offers a fresh perspective on the lives of the four Georges and the events that shaped their characters and reigns. From love affairs to family feuds, political wrangling and beyond, it is a chance to peer behind the pomp and follow these iconic figures from cradle to grave. As their very different lives will show, being a king isn't always about grand parties and jaw-dropping jewels, and sometimes following in a father's footsteps can be the hardest job around. Take a step back in time and meet the wives, mistresses, friends and foes of these remarkable kings who shaped the nation, and find out what really went on behind closed palace doors. Whether dodging assassins, marrying for money, digging up their ancestors or sparking domestic disputes that echoed down the generations, the Georgian kings of Great Britain were never short on drama.