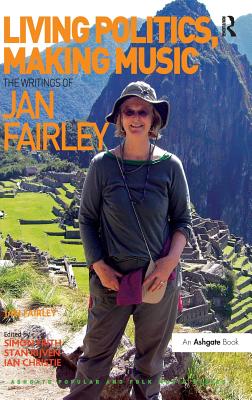 
Not On Our Shelves—Ships in 1-5 Days
(This book cannot be returned.)
The late Jan Fairley (1949-2012) was a key figure in making world music a significant topic for popular music studies and an influential contributor to such world music magazines as fRoots and Songlines. This book celebrates her contribution to popular music scholarship by gathering her most important work together in a single place. The result is a richly informed and entertaining volume that will be of interest to all scholars in the field while also serving as an excellent introduction for students interested in popular music as a global phenomenon. Fairley's work was focused on the problems and possibilities of cross-cultural musical influences, fantasies and flows and on the importance of performing circuits and networks. Her interest in the details of music-making and in the lives of music-makers means that this collection is also an original and illuminating study of music and politics. In drawing on Jan Fairley's journalism, this volume also offers students a guide to various genres of world music, from Cuban son to flamenco, as well as an insight into the lives of such world music stars as Mercedes Sosa and Silvio Rodr -guez. This is inspiring as well as essential reading.
Simon Frith is Tovey Professor of Music at the University of Edinburgh. He was a founder member of IASPM and a founding editor of Popular Music. He is presently working on a three volume history of live music in the UK since 1950. The first volume,1950-1967. From Dance Hall to the 100 Club, was published by Ashgate in 2013. He chairs the judges of the Mercury Music Prize and is a Fellow of the British Academy. Stan Rijven is a Dutch pop music critic and historian, DJ and cultural entrepreneur. From the seventies onwards he pioneered the documenting of the rise of pop and world music culture in various Dutch media and abroad. He is a founder member of IASPM, Pop Archive Netherlands (PAN) and World Music Forum NL (WMF NL). Ian Christie is Anniversary Professor of Film and Media History at Birkbeck College. From 1976-1996 he worked at the British Film Institute as, variously, Head of Distribution, Exhibition, Video Publishing and Special Projects. His most recent book is Audience (2012). He is a regular broadcaster and writer for Sight and Sound, and a Fellow of the British Academy.