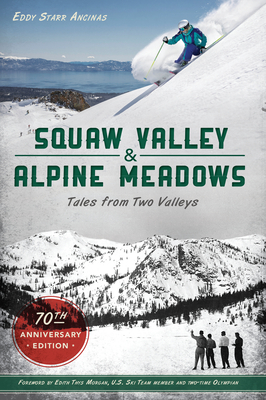 
Not On Our Shelves—Ships in 1-5 Days
Nestled amid California's High Sierra Peaks, two valleys have captured the imaginations of skiers and mountain explorers year after year. Squaw Valley made a name for itself on the world stage as the host of the 1960 Winter Olympics. Meanwhile, just over a high ridge, Alpine Meadows was developed by devoted local skiers and Bay Area families. Discover the stories of Wayne Poulsen, John Reily and Alex Cushing as they battle avalanches, fires, floods, public opinion and the whims of mountain weather. This revised edition celebrates these two North Lake Tahoe locales, now united and looking to the future. Local award-winning author and ski historian Eddy Ancinas shares the history of these two valleys as no one has done before.