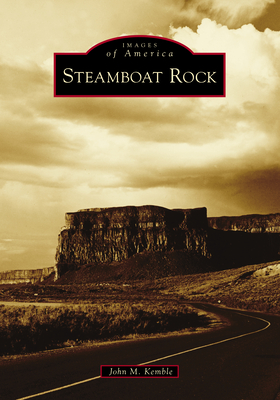 
Not On Our Shelves—Ships in 1-5 Days
Rising out of Banks Lake in the heart of Grand Coulee is Steamboat Rock State Park, a destination for thousands of vacationers every year. A geological wonder that was once an island in the diverted bed of the Columbia River, Steamboat Rock spent centuries landlocked in Washington State, finally becoming a beacon and a crossroad for travelers of the barren landscape. When the pioneers arrived, they found a rugged frontier and faced many hardships establishing a community, only to have it all washed away with the waves of progress and the building of the Grand Coulee Dam. This is the story of the people who settled the Steamboat Rock area, the land they fought hard to tame, and the inevitable outcome of man versus progress. With this book, uncover mysteries and unlock the story of Steamboat Rock.