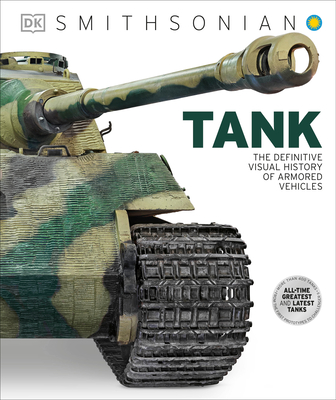 By DK, Smithsonian Institution (Contributions by)

Pivotal to modern warfare, tanks have dominated the battlefield for over a century. Get up close to more than 400 military colossuses with this definitive visual guide to armored vehicles.

In 1916, the British built a vehicle that could pound the battlefield impervious to enemy fire, crushing obstacles and barbed wire in its path. The first tank, or "Mother" as it was known, had arrived. In Tank you can view it in detail, along with other iconic models including the German Panzer, the legendary Tiger, the Vickers Medium Mark II, the Centurion, and the Hellcat – the fastest armored fighting vehicle ever.

This comprehensive volume takes you through the most exciting story in recent military history with the development of heavy artillery, anti-tank weaponry, and the men – such as Mikail Koshkin and Sir William Tritton – who designed these awe-inspiring beasts.

Produced with The Tank Museum, Tank traces the tank’s development in response to two world wars, Korea, Vietnam, the Cold War and many other conflicts. It shows each model in detail, highlighting details such as their performance, specification, armor, weaponry, and much more.

If you are interested in modern warfare, Tank is truly unmissable reading.

DK was founded in London in 1974 and is now the world's leading illustrated reference publisher and part of Penguin Random House, formed on July 1, 2013. DK publishes highly visual, photographic nonfiction for adults and children. DK produces content for consumers in over 87 countries and in 62 languages, with offices in Delhi, London, Melbourne, Munich, New York, and Toronto. DK's aim is to inform, enrich, and entertain readers of all ages, and everything DK publishes, whether print or digital, embodies the unique DK design approach. DK brings unrivalled clarity to a wide range of topics with a unique combination of words and pictures, put together to spectacular effect. We have a reputation for innovation in design for both print and digital products.   Our adult range spans travel, including the award-winning DK Eyewitness Travel Guides, history, science, nature, sport, gardening, cookery, and parenting. DK’s extensive children’s list showcases a fantastic store of information for children, toddlers, and babies. DK covers everything from animals and the human body, to homework help and craft activities, together with an impressive list of licensing titles, including the bestselling LEGO® books. DK acts as the parent company for Alpha Books, publisher of the Idiot's Guides series and Prima Games, video gaming publishers, as well as the award-winning travel publisher, Rough Guides.