Tracking the Tiger: The Story of Harkjoon Paik (Hardcover) 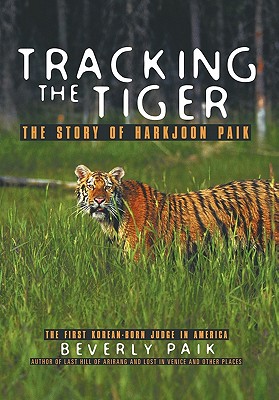 Tracking the Tiger: The Story of Harkjoon Paik (Hardcover)


Not On Our Shelves—Ships in 1-5 Days
Harkjoon Paik left his native Korea in the midst of war. His home destroyed and his educational opportunities lost, he left everything and everyone behind in search of a way to accomplish his life goals. He arrived in the United States as an ambitious and optimistic teenager, knowing no one and without resources.

Tracking the Tiger is the story of how he survived in the chaos of battle and immigration. He created a new life for himself, making his way with hard work, and went on to earn degrees from Stanford University and Stanford Law School. He began to practice law and, at the age of thirty-eight, became the first native-born Korean to sit on the Superior Court bench in not only California but also the United States.

Judge Paik finds joy in life wherever he goes. He has raised three children of great accomplishment, and he shares many lifelong friendships and some great adventures along the way.

His wife, Beverly Paik, tells the story of her husband's life and career in his voice. They met more than fifty years ago as students at Stanford University. When he granted her access to his diaries, she knew his was a story that needed to be shared with a much bigger audience.

This is their story, one of love and triumph over adversity--and of the undeniable power of hope.