Death of a Liar (A Hamish Macbeth Mystery #30) (Hardcover) 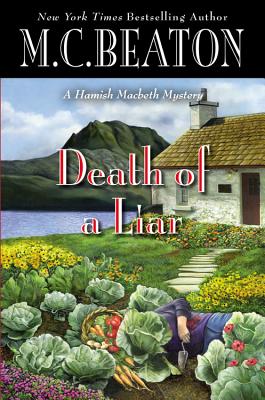 Death of a Liar (A Hamish Macbeth Mystery #30) (Hardcover)

This is book number 30 in the A Hamish Macbeth Mystery series.

Death of a Liar: A Hamish Macbeth Mystery

Sergeant Hamish Macbeth is alarmed to receive a report from a woman in the small village of Cronish in the Scottish Highlands. She has been brutally attacked and the criminal is on the loose. But upon further investigation, Hamish discovers that she was lying about the crime. So when the same woman calls him back about an intruder, he simply marvels at her compulsion to lie. This time, though, she is telling the truth. Her body is found in her home and Hamish must sort through all of her lies to solve the crime.
M. C. Beaton has won international acclaim for her New York Times bestselling Hamish Macbeth mysteries. The BBC has aired 24 episodes based on the series. Beaton is also the author of the bestselling Agatha Raisin series, which will air as an eight-episode dramatic series on Sky1, starring Ashley Jensen. She lives in the Cotswolds with her husband. For more information, you can visit MCBeaton.com.
"Highly entertaining...Beaton's series remains as engaging as ever."—Publishers Weekly

"This Hamish McBeth mystery is as quirky as the others. Hamish is an endearing character who coincidentally happens upon all sorts of mischief and finds himself wrapped up in the center of a murder investigation that hits close to home."—RT Times

"Longing for escape? Tired of waiting for Brigadoon to materialize? Time for a trip to Lochdubh, the scenic, if somnolent, village in the Scottish Highlands where M. C. Beaton sets her beguiling whodunits featuring Constable Hamish Macbeth."—New York Times Book Review

"Hamish Macbeth is that most unusual character, one to whom the reader returns because of his charming flaws. May he never get promoted."—New York Journal of Books

"With residents and a constable so authentic, it won't be long before tourists will be seeking Lochdubh and believing in the reality of Hamish Macbeth as surely as they believed in Sherlock Holmes."—Denver Rocky Mountain News

"Macbeth is the sort of character who slyly grows on you."—Chicago Sun-Times