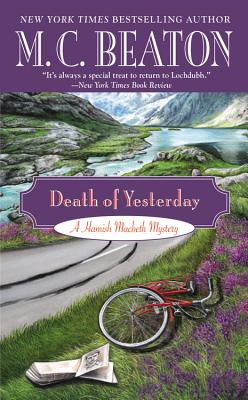 This is book number 28 in the A Hamish Macbeth Mystery series.

When a local woman tells Sergeant Hamish Macbeth that she doesn't remember what happened the previous evening, he doesn't begin to worry. She had been out drinking, after all, and he'd prefer not to be bothered with such an arrogant and annoying woman. But when her body is discovered, Hamish is forced to investigate a crime that the only known witness--now dead--had forgotten.
M. C. Beaton has won international acclaim for her New York Times bestselling Hamish Macbeth mysteries. The BBC has aired 24 episodes based on the series. Beaton is also the author of the bestselling Agatha Raisin series, which will air as an eight-episode dramatic series on Sky1, starring Ashley Jensen. She lives in the Cotswolds with her husband. For more information, you can visit MCBeaton.com.
"Delightful...Cozy fans are in for a treat."—Publishers Weekly

"This red-headed police sergeant living in the small village of Lochdubh, Scotland is such a hoot and a howl that you never want to see this character come to an end...There's never a dull moment in the life of Hamish Macbeth and, thankfully, this author keeps churning out books so Hamish's fans can sit back and enjoy the fun. A+!"—New England News