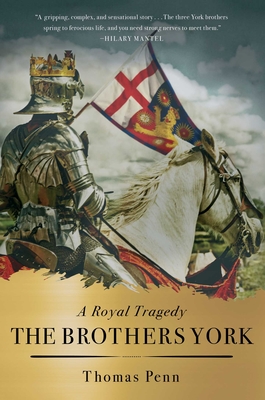 
On Our Shelves Now at:
Vicious battles, powerful monarchs, and royal intrigue abound in this “gripping, complex, and sensational” (Hilary Mantel) true story of the War of the Roses—a struggle among three brothers, two of whom became kings, and the inspiration for Shakespeare’s Richard III.

In 15th-century England, two royal families, the House of York and the House of Lancaster, fought a bitter, decades-long civil war for the English throne. As their symbols were a red rose for Lancaster and a white rose for York, the conflict became known as the War of the Roses.

During this time, the house of York came to dominate England. At its heart were three charismatic brothers–King Edward IV, and his two younger siblings George and Richard—who became the figureheads of a spectacular ruling dynasty. Together, they looked invincible.

But with Edward’s ascendancy, the brothers began to turn on one another, unleashing a catastrophic chain of rebellion, vendetta, fratricide, usurpation, and regicide. The brutal end came at Bosworth Field in 1485, with the death of the youngest, then Richard III, at the hands of a new usurper, Henry Tudor, later Henry VII, progenitor of the Tudor line of monarchs.

The Brothers York recounts a conflict that fractured England for a generation “with masterly skill” (The Wall Street Journal) in which “the tragedy and brutality of the Wars of the Roses jumps out from every page” (Financial Times). As gripping as any historical fiction, Thomas Penn paints “a dramatic portrait of 15th-century England…[and] brings keen understanding and a sharp eye for detail to his prodigiously researched, engrossing history of the decades-long fight between Lancaster and York” (Kirkus Reviews, starred review).
Thomas Penn is publishing director at Penguin Books UK. He holds a PhD in medieval history from Clare College, Cambridge University, and writes for The Guardian, the Daily Telegraph, and the London Review of Books, among other publications. He is the author of The Brothers York and Winter King: Henry VII and the Dawn of Tudor England.
“A gripping, complex and sensational story, told with calm narrative command. It's a story we think we know—but most accounts leave the personnel as frozen as portraits in stained glass. Here, the three  York brothers spring to ferocious life, and you need strong nerves to  meet them. With insight and skill, Penn cuts through the thickets of history to find the heart of these heartless decades.”
— Hilary Mantel

"Mr. Penn’s narrative is rich in detail, and he leads the reader through a dense and dark forest with masterly skill. . . . A gripping account of the brothers York and of the England they briefly governed."
— Allan Massie

“Superb. . . . The tragedy and brutality of the Wars of the Roses jumps out from every page.”
— The Financial Times