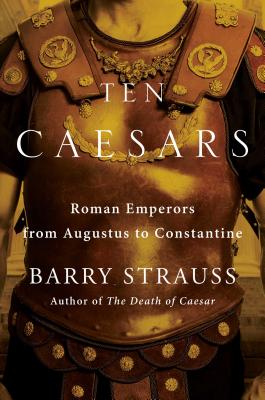 
Special Order—Subject to Availability
Bestselling classical historian Barry Strauss delivers “an exceptionally accessible history of the Roman Empire…much of Ten Caesars reads like a script for Game of Thrones” (The Wall Street Journal)—a summation of three and a half centuries of the Roman Empire as seen through the lives of ten of the most important emperors, from Augustus to Constantine.

In this essential and “enlightening” (The New York Times Book Review) work, Barry Strauss tells the story of the Roman Empire from rise to reinvention, from Augustus, who founded the empire, to Constantine, who made it Christian and moved the capital east to Constantinople.

During these centuries Rome gained in splendor and territory, then lost both. By the fourth century, the time of Constantine, the Roman Empire had changed so dramatically in geography, ethnicity, religion, and culture that it would have been virtually unrecognizable to Augustus. Rome’s legacy remains today in so many ways, from language, law, and architecture to the seat of the Roman Catholic Church. Strauss examines this enduring heritage through the lives of the men who shaped it: Augustus, Tiberius, Nero, Vespasian, Trajan, Hadrian, Marcus Aurelius, Septimius Severus, Diocletian and Constantine. Over the ages, they learned to maintain the family business—the government of an empire—by adapting when necessary and always persevering no matter the cost.

“To cover 360-odd years in a similar number of pages means going at quite a lick. . . .The strength of this approach is that it offers perspective.  All too often books on Rome, like literary grand tourists, revisit the familiar sites, lingering over the naughty Neros, the effective armies and the efficient bureaucracy. But, as Strauss shows, Rome was far more complex and far more interesting than that. . . . Enlightening.”
— Catherine Nixey

“No one knows the secrets, the curses, the power and the glory of the Imperial families of Rome better than Barry Strauss. His Ten Caesars is captivating—essential reading for Romanophiles and for everyone who seeks to understand the most formidable personalities of the Roman Empire.”
— Adrienne Mayor, author of The Amazons and The Poison King

"In a single volume, Barry Strauss delivers the near-impossible: a straightforward, factual, insightful survey of the vast and turbulent history of Rome’s emperors from Augustus to Constantine. Any reader, from novice to expert, will arrive at the final page with a clearer understanding of the men (and sometimes women) who oversaw the shifting fortunes of Rome for over three hundred years."
— Steven Saylor, author of The Throne of Caesar and the New York Times bestseller Roma: The Novel of Ancient Rome

“Informative and engaging, erudite and captivating. . . . Though focused on individual Caesars, [Strauss] artfully frames each Caeser within his respective social, political, familial, and religious world, permitting him to narrate a story with a panoply of three-dimensional characters and events.”
— Ancient History Encyclopedia (ancient.eu)

“Strauss has mastered a vivid narrative line, a practiced skill at demystifying the past. . . . Readers will learn a lot from his book and the fables will make the lessons a bit sweeter along the way.”
— Steve Donoghue

“Lively biographies of the 10 best-known emperors of Rome.”
— Kirkus Reviews

"Explores the reigns of Rome’s ten most influential emperors. . . . The women surrounding these emperors are also given their share of the credit and vividly portrayed. . . . This captivating narrative breathes new life into a host of transformative figures."
— Publishers Weekly