The Heart of Everything That Is: The Untold Story of Red Cloud, An American Legend (Paperback) 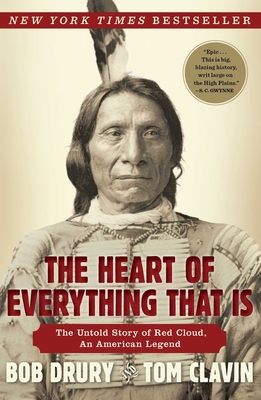 The Heart of Everything That Is: The Untold Story of Red Cloud, An American Legend (Paperback)

“The authors present the epic story of Red Cloud, the only Native American tribal leader to defeat the U.S. Army in the West. Red Cloud could be vicious and savage and he used those attributes to achieve power. But he could also show patience and restraint in his efforts to defeat the Army's expansion into the Powder River country of present-day Wyoming. This book presents an important chapter in American history that needed to be told, using Red Cloud's own autobiography as a major source.”
— George Rishel, The Sly Fox, Virden, IL

This acclaimed New York Times bestselling biography of the legendary Sioux warrior Red Cloud, is “a page-turner with remarkable immediacy…and the narrative sweep of a great Western” (The Boston Globe).

Red Cloud was the only American Indian in history to defeat the United States Army in a war, forcing the government to sue for peace on his terms. At the peak of Red Cloud’s powers the Sioux could claim control of one-fifth of the contiguous United States and the loyalty of thousands of fierce fighters. But the fog of history has left Red Cloud strangely obscured. Now, thanks to the rediscovery of a lost autobiography, and painstaking research by two award-winning authors, the story of the nineteenth century’s most powerful and successful Indian warrior can finally be told.

In this astonishing untold story of the American West, Bob Drury and Tom Clavin restore Red Cloud to his rightful place in American history in a sweeping and dramatic narrative based on years of primary research. As they trace the events leading to Red Cloud’s War, they provide intimate portraits of the many lives Red Cloud touched—mountain men such as Jim Bridger; US generals like William Tecumseh Sherman, who were charged with annihilating the Sioux; fearless explorers, such as the dashing John Bozeman; and the memorable warriors whom Red Cloud groomed, like the legendary Crazy Horse. And at the center of the story is Red Cloud, fighting for the very existence of the Indian way of life.

“Unabashed, unbiased, and disturbingly honest, leaving no razor-sharp arrowhead unturned, no rifle trigger unpulled....a compelling and fiery narrative” (USA TODAY), this is the definitive chronicle of the conflict between an expanding white civilization and the Plains Indians who stood in its way.
Bob Drury is the author/coauthor/editor of nine books. He has written for numerous publications, including The New York Times, Vanity Fair, Men’s Journal, and GQ. He is currently a contributing editor and foreign correspondent for Men’s Health. He lives in Manasquan, New Jersey.

Tom Clavin is the author or coauthor of sixteen books. For fifteen years he wrote for The New York Times and has contributed to such magazines as Golf, Men's Journal, Parade, Reader’s Digest, and Smithsonian. He is currently the investigative features correspondent for Manhattan Magazine. He lives in Sag Harbor, New York.
“A ripping yarn . . . A quintessentially Western tale of bold exploits, tough characters, brutal conditions and a lost way of life, this sounds like the sort of story that practically tells itself. Yet you only realize how little justice most popular histories do to their source material when you come across a book, like this one, that does everything right. It’s customary to say of certain nonfiction books — gussied up with plenty of 'color' and psychological speculation — that they 'read like a novel,' but truth be told, most of the time we’d have to be talking about a pretty mediocre novel. The Heart of Everything That Is, on the other hand, resembles the good ones. There were times, turning its pages, when I could almost smell the pines of the Black Hills, feel the icy wind tearing down from Canada across the prairie and hear the hooves of the buffalo pounding the earth.”
— Laura Miller

“Exquisitely told . . . Remarkably detailed . . . The story of Red Cloud's unusual guile and strategic genius makes the better-known Sitting Bull and Crazy Horse pale in comparison. . . . This is no knee-jerk history about how the West was won, or how the West was lost. This historical chronicle is unabashed, unbiased and disturbingly honest, leaving no razor-sharp arrowhead unturned, no rifle trigger unpulled. . . . A compelling and fiery narrative.”
— USA Today

“Vivid . . . Lively . . . A tale of lies, trickery, and brutal slaughter . . . In telling the story of Red Cloud, Messrs. Drury and Clavin appropriately bring a number of the larger-than-life figures from that time onstage . . . [and] chronicle in considerable detail the shameful treatment of the Indians across the plains and the destruction of their ancient way of life.”
— Christopher Corbett, The Wall Street Journal

“A page turner . . . Drawing on archives, letters, and a long-lost autobiography written toward the end of Red Cloud’s life, the narrative has a remarkable immediacy . . . [and] the narrative sweep of a great Western.”
— Kate Tuttle, The Boston Globe

“Valuable . . . Meticulous . . . [A] remarkable story . . . The writers don’t shy away from the atrocities on both sides of the gruesome, long-running conflict between the Indians and the U.S. forces. But when, for the umpteenth time, U.S. officials break a contract as soon as the glint of gold is spotted in the hills, one cannot help but feel that there’s all the more reason to celebrate one of the Sioux’s most impressive fighters.”
— Smithsonian

“The authors paint a full and vivid picture of the Oglala Sioux leader . . . The story of Red Cloud is presented here with all the tension and excitement of a good Western novel. . . . The narrative is gripping but not sentimental, and it is well-sourced, drawing, for example, on Red Cloud’s autobiography, lost for nearly a century, and the papers of many others who knew Red Cloud’s War.”
— Minneapolis Star Tribune

“Astounding . . . A tour de force of historical storytelling . . . The Heart of Everything That Is is grand in scope and beautifully observed. . . . Together, [Drury and Clavin] have managed a feat of scholarship that interweaves ethnological brilliance and an insightful reinterpretation of Indian culture from the point of view of the Sioux.”
— The Wichita Eagle