How to Be Successful without Hurting Men's Feelings: Non-threatening Leadership Strategies for Women (Paperback) 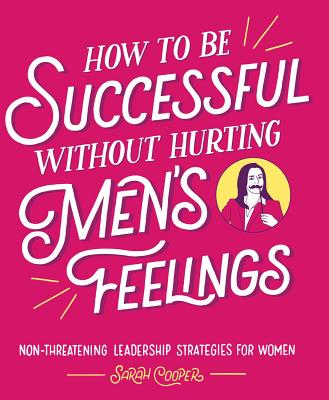 How to Be Successful without Hurting Men's Feelings: Non-threatening Leadership Strategies for Women (Paperback)


In Stock—Click for Locations
Comedian, star of the Netflix special Everything's Fine, and Trump lip-syncing sensation Sarah Cooper illustrates how women can achieve their dreams, succeed in their careers, and become leaders, all without harming the fragile male ego.

Ambitious women are so scary. In this fast-paced business world, female leaders need to make sure they’re not perceived as pushy, aggressive, or competent.

Chapters include, among others, “9 Non-threatening Leadership Strategies for Women,” "How to Ace Your Job Interview Without Over-acing It," and “Choose Your Own Adventure: Do You Want to Be Likable or Successful?” It even includes several pages to doodle on while men finish what they're saying. Each chapter also features an exercise with a set of "inaction items" designed to challenge women to be less challenging.

In April 2020, Sarah went viral with a video called “How to Medical,” in which she lip syncs Trump’s proposed COVID-19 cures of UV light and disinfectant, viewed over 25 million times across Twitter, YouTube, Instagram and Facebook. She has since created dozens more Trump lip-syncs each garnering millions of views. She was named one of Variety’s 10 Comics to Watch for 2020, was featured at this year’s Just for Laughs Festival and has appeared on Jimmy Kimmel Live, The Tonight Show, Ellen, and has been featured in Vanity Fair, The New York Times, Washington Post, InStyle Magazine and countless others.

" ... One of the hottest comics of the coronavirus era." (Los Angeles Times)

“Sarah Cooper Might Be the Best Trump Impressionist Ever." (The Daily Beast)

“Sarah Cooper is killing it with her Trump lip-syncs.” (Boing Boing)