Adulthood Is a Myth: A Sarah's Scribbles Collection (Paperback) 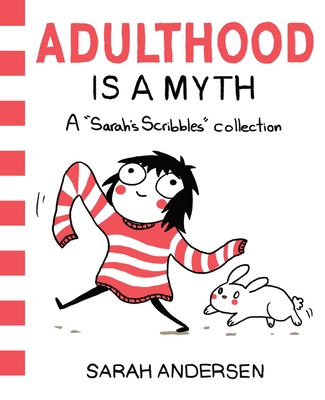 Adulthood Is a Myth: A Sarah's Scribbles Collection (Paperback)


Not On Our Shelves—Ships in 1-5 Days
The hilarious debut Sarah's Scribbles collection from Sarah Andersen, winner of three consecutive Goodreads Choice Awards for Graphic Novels and Comics

These casually drawn, perfectly on-point comics by the hugely popular young artist Sarah Andersen are for the rest of us. They document the wasting of entire beautiful weekends on the internet, the unbearable agony of holding hands on the street with a gorgeous guy, and dreaming all day of getting home and back into pajamas. In other words, the horrors and awkwardnesses of young modern life. Oh and they are totally not autobiographical. At all.

Adulthood Is a Myth presents many fan favorites plus dozens of all-new comics exclusive to this book. Sarah's frankness on personal issues like body image, self-consciousness, introversion, relationships, and the frequency of bra-washing makes her comics highly relatable and deeply hilarious, showcasing how she became one of the most influential voices in web cartoonists.
Sarah Andersen’s debut book, Adulthood is a Myth, was the 2016 Goodreads Choice Award Winner for Graphic Novels and Comics. She also won the award for Big Mushy Happy Lump in 2017, and Herding Cats in 2018. Her graphic novel Fangs was nominated for an Eisner Award and appeared on The New York Times best seller list.

Sarah Andersen is a cartoonist and illustrator in her twenty-somethings. She graduated from the Maryland Institute College of Art in 2014 and currently lives in Portland, Oregon. Her semi-autobiographical comic strip, Sarah’s Scribbles, finds the humor in living as an introvert with beloved pets and the continual struggles with waking up in the morning, being productive, and dealing with social situations.