The Fuzzy Bunch: A Get Fuzzy Collection (Paperback) 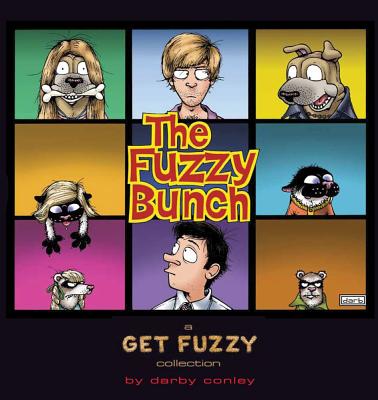 The Fuzzy Bunch: A Get Fuzzy Collection (Paperback)

This is book number 20 in the Get Fuzzy series.

Get Fuzzy is THE strip for pet lovers who know that if their own cats and dogs could talk, they would speak Buckyese and Satchelese.

House cats are known to be aloof, but “cat-titude” reaches new heights in Get Fuzzy, the bitingly hilarious comic strip from cartoonist Darby Conley. Get Fuzzy is a wry portrait of single life, with pets. At the center of this warm and fuzzy romp is Rob Wilco, a single, mild-mannered ad executive and guardian of anthropomorphic scamps Bucky and Satchel. Bucky is a temperamental cat who clearly wears the pants in this eccentric household. Satchel is a gentle pooch who tries to remain neutral, but frequently ends up on the receiving end of Bucky's mischief. Together, this unlikely trio endures all the trials and tribulations of a typical family...more or less.

The National Cartoonists Society honored Get Fuzzy with a Reuben division award, naming it the Best Newspaper Comic Strip of 2002.
Get Fuzzy first appeared in newspapers in 1999. Darby Conley lives in Boston, with four cats and three boxes of Band-Aids.