Survival of the Filthiest: A Get Fuzzy Collection (Paperback) 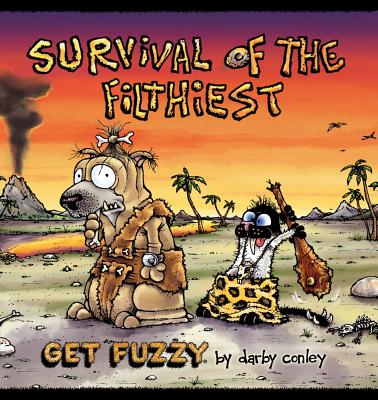 Survival of the Filthiest: A Get Fuzzy Collection (Paperback)

This is book number 17 in the Get Fuzzy series.

Survival of the Filthiest takes Bucky the cat and Satchel the pooch back to their animal origins, not that they’ve ever strayed too far from their nonpedigrees. Constantly testing the patience of their “amateur treat boy” Rob, Bucky and Satchel pull off daily antics in the Get Fuzzy household that are routinely smelly, messy, and, yes, even filthy.

In Survival of the Filthiest, Bucky decides to secede from the United States and declare the state of Buckyvania in his closet, complete with visitor permissions and postcards. When the state of Buckyvania has a food shortage, he is forced to launch a successful special ops raiding party. Not to be deterred when Buckyvania falls, Bucky begins a government takeover plan with Mac Manc McManx slated as the new president. Meanwhile, Satchel, convinced there are ghosts in the house, hires the Atlantic Research of Supernatural Entities Group to ghostbust. When their study is a bust, Mystic Misty, a feline cable access psychic, steps in to uncover the spirits. All this amid Bucky making batteries out of monkeys and Satchel eating all but the head of Rob’s Star Wars collectible equate to another sidesplitting look into the crazy world of Get Fuzzy.

Get Fuzzy first appeared in newspapers in 1999. Darby Conley lives in Boston, with four cats and three boxes of Band-Aids.