Larry in Wonderland: A Pearls Before Swine Collection (Paperback) 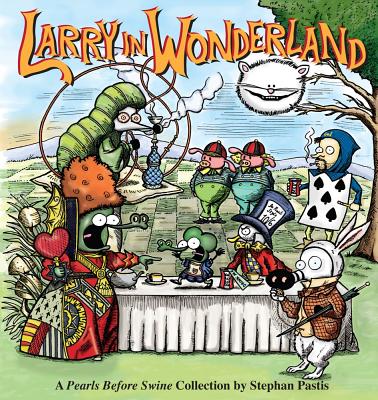 Larry in Wonderland: A Pearls Before Swine Collection (Paperback)

This is book number 16 in the Pearls Before Swine series.

Stephan Pastis offers Pearls Before Swine fans a visit to the other side of the looking glass with his latest collection, Larry in Wonderland. Collecting almost a year's worth of strips, Larry in Wonderland offers cutting-edge commentary on recent news events, popular culture, and cartoon-page contemporaries, and imparts the knowledge that in Wonderland, crocodiles taste a lot like chicken.

Through Pastis's mindful menagerie of characters, including the Mad Ducker, Cheshire Snuffles, Tweedledum Pig, and Tweedledee Idiot Pig, along with Raterpillar, Zebra, and Larry the Croc, Pearls Before Swine expertly illustrates the flaws and shortcomings of human nature, while remaining "indifferent" to conventional cartoon molds such as plotline "continuity." In the words of Raterpillar, "Plotline schmotline."

With multiple honors as Best Comic Strip of the Year by the National Cartoonists Society, and an international fan base that follows the strip's appearance in more than 600 newspapers worldwide, Pearls Before Swine transports readers to a world of shifting perspectives and alternate realities, like the one presented inside Larry in Wonderland.
Stephan Pastis is an attorney turned cartoonist. A graduate of the University of California, Berkeley, and the UCLA School of Law, he worked as a lawyer before trying his hand at cartooning. Pastis lives in the Bay Area with his wife and two children.