The Dream Job: The My Wild Ride On The Corporate Side With The Leafs (Paperback) 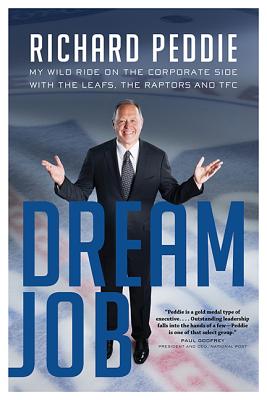 The Dream Job: The My Wild Ride On The Corporate Side With The Leafs (Paperback)

The former head of one of the most successful franchises in the world takes readers into the boardrooms and dressing rooms of major league sports.

Millions of sports fans think they know how to run the home team better than the executive in charge of the operation. Such pressure is bound to teach a person a thing or two about leadership, humility and success. Richard Peddie, former president and CEO of Maple Leaf Sports and Entertainment (MLSE), has clearly learned a few lessons during his years in the business, and now he shares them for the first time.

Dream Job takes readers behind the scenes at MLSE and into the world of Richard Peddie, the man Forbes magazine once called both "a bum," based on the Leafs' lacklustre performance, but also "a wizard" on the business side of professional sport. Entrepreneurs will be keen to learn how a working-class kid from Windsor who barely made it into university managed to reach the top of virtually every organization that ever hired him.

Along the way, Peddie tells stories from his inside vantage point: why the popcorn at Maple Leaf Gardens was always stale, the strange things that rock stars insisted on having backstage at the SkyDome, what it's like to be on the receiving end of death threats from a disgruntled fan, who were some of the quirkiest characters to have worn the Toronto Raptors uniform, and what happened the day it rained seat cushions at the Toronto Football Club's first home game. And, of course, he broaches the tricky business of hiring general managers and the awful business of firing them.

Hockey, basketball and soccer fans and anyone who aspires to lead will all take something away from this fascinating, insightful and hard-hitting book.

RICHARD PEDDIE was president and CEO of Maple Leaf Sports and Entertainment for fifteen years until his retirement in 2012, overseeing all business and team operations related to the Maple Leafs, the Raptors, Toronto FC and the Marlies, as well as running the operations of the Air Canada Centre, MLSE's three television channels and Maple Leaf Square. A native of Windsor, Ontario, Peddie graduated from the University of Windsor in 1970 and received an honorary doctorate from the institution in 2001. Peddie lives in Toronto with his wife, Colleen.