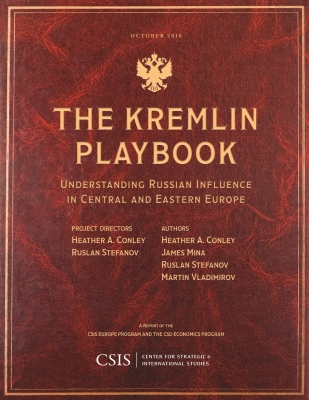 
Special Order—Subject to Availability
Russia has cultivated an opaque web of economic and political patronage across the Central and Eastern European region that the Kremlin uses to influence and direct decisionmaking. This report from the CSIS Europe Program, in partnership with the Bulgarian Center for the Study of Democracy, is the result of a 16-month study on the nature of Russian influence in five case countries: Hungary, Slovakia, Bulgaria, Latvia, and Serbia.
Heather A. Conley is senior vice president for Europe, Eurasia, and the Arctic and director of the Europe Program at CSIS in Washington, DC. James Mina is a research associate with the Europe Program at CSIS. Ruslan Stefanov is the director of the Economic Program at the Center for the Study of Democracy in Sofia, Bulgaria. Martin Vladimirov is an analyst at the Center for the Study of Democracy.