The Natural History of Primates: A Systematic Survey of Ecology and Behavior (Paperback) 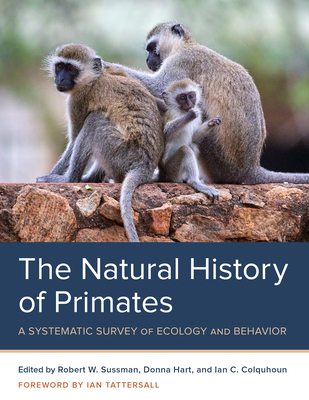 The Natural History of Primates: A Systematic Survey of Ecology and Behavior (Paperback)


Not On Our Shelves—Ships in 1-5 Days
The interest in primates, from lemurs to gorillas, has never been greater. Primatologists are continually finding evidence in the behavior and ecology of our closest genetic relatives that sheds light on human origins. So, just who are these 520+ species of complex and intelligent mammals inhabiting the Neotropics, Africa, Madagascar, and Asia? The Natural History of Primates provides the most current information on wild primates from experts who have studied them in their natural environments. This volume provides up-to-date facts and figures on how groups of social primates interact with each other and the plants and other animal species in their ecosystems: what they eat, which predators might eat them, how males and females seek mates, how infants are raised, and myriad other fascinating details about their visual and vocal communication, their ability to craft and use tools, and the varieties of locomotion they employ. As human populations continue to expand into the rainforests, savannas, and woodlands where nonhuman primates dwell, the preservation of these species becomes ever more important. The Natural History of Primates is unique in its emphasis on the conservation status of primate species and its ample discussions of how humans and nonhuman primates can coexist in the twenty-first century.
Robert W. Sussman was a Professor of Anthropology at Washington University in St. Louis, and until his death in 2016 was considered one of the most outstanding field primatologists of his generation. He was the author of almost 200 journal articles, book chapters, books, and edited volumes on a wide range of issues in primate behavior, ecology, and conservation. In 2015, Bob published a landmark volume titled The Myth of Race: TheTroubling Persistence of an Unscientific Idea (Harvard University Press). His death represents a major loss to the world's primate community. Donna Hart is recently retired from the Department of Anthropology, University of Missouri - St. Louis. She earned a PhD at Washington University in St. Louis. Her research areas include predation on primates and the ramifications of predation on early hominins. The latter topic is explored in Man the Hunted, the book for which Hart, and her co-author Bob Sussman, were awarded the 2006 W. W. Howells Book Prize from the American Anthropological Association. Preceding academics, Hart worked in the field of wildlife conservation, specializing in international wildlife treaties. Ian. C. Colquhoun first conducted behavioral observations on lemurs while an undergraduate at the University of Western Ontario. Fieldwork on lemurs continued during MA (McMaster University) and PhD studies (Washington University in St. Louis). He is an Associate Professor in the Department of Anthropology at the University of Western Ontario and past president of the Canadian Association for Biological Anthropology/l'Association Canadienne d'Anthropologie Biologique and member of the Madagascar Section of the IUCN Primate Specialist Group.