The Man Who Couldn't Eat (Paperback) 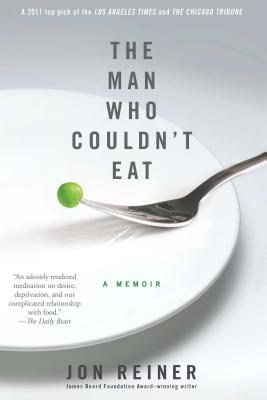 The Man Who Couldn't Eat (Paperback)


Not On Our Shelves—Ships in 1-5 Days
A personal journey with Crohn’s disease: months of excruciating treatment and the enduring effect it has on the author’s emotional state and relationship with food—as well as on his wife, children, and friends.

In this beautifully written memoir, both gut-wrenching and inspiring, award-winning writer Jon Reiner tells the story of his agonizing battle with Crohn’s disease—and the extraordinary places his hunger and obsession with food took him. I’m a glutton in a greyhound’s body, a walking contradiction, in the grip of the one thing I can’t have—food, writes Reiner, who details what happens when that which keeps you alive, that bonds us together and marks life’s special occasions, becomes a toxic substance, an inflammatory invader.

His unvarnished account depicts an explosive medical emergency, a marriage in crisis, children faced with grown-up fears, a man at a life-and-death crossroads sifting through his past and his present. And it captures a tough, courageous climb out of hopelessness as Reiner began a process of healing in body and mind, discovering a renewed appetite, any way he could manage it, for the things that truly matter most.
JON REINER won the 2010 James Beard Foundation Award for Magazine Feature Writing with Recipes for the collaborative Esquire article “How Men Eat.” His memoir, The Man Who Couldn’t Eat, is based on an acclaimed article of the same name that he wrote for Esquire in 2009. He lives in New York City with his wife and two children.

“In this engrossing and candid memoir, James Beard Award–winning writer Reiner tells of his doctor's orders following a diagnosis of a torn intestine: eat nothing. Reiner, who at age 46 had a history of Crohn's disease, gets even more bad news when emergency surgery results in a severely infected abdomen, among other complications, that force him to get his nutrition intravenously. The bulk of the book is given over to the singular experience of not eating at all and the graphic details of his treatment, while chronicling its impact on the author, his wife, and his two young sons. He endures a feverish dream of food-related memories from his childhood in the Caribbean and his adulthood in New York. Questions of mortality and even suicide arise, and while the immediate ability to taste does not return, the narrator's capacity for eating solid food eventually does, though swinging at times between extremes of hunger and appetite. Reiner's use of detail amid the haze of sickness sometimes tests the suspension of disbelief, but as a piece of writing it's fearless and singular.” —Publishers Weekly

"Jon Reiner has thrown the door to the mysterious world of chronic illness wide open in The Man Who Couldn't Eat, a memoir of an experience that is as illuminating to read about as it was horrifying to live. This wholly enthralling book will make you appreciate every breath you take—and every bite you eat." —Terry Teachout, drama critic for The Wall Street Journal and author of Pops: A Life of Louis Armstorng

"Reiner has the moxie and the courage not only to tell the harrowingly real story of his fight to stay alive, but to do so with detachment and a crazy sense of irony. His memoir about food, hunger, and a near-death experience is a food lover’s nightmare and—with his food memories as the focal point—a necessary read." —Jonathan Waxman, author of Italian, My Way

"I will never take eating for granted again. Wow! What a roller coaster. All I kept thinking was, You cannot be serious! But he was." —John McEnroe, author of You Cannot Be Serious

“I have spent years of my life obsessing about my weight, feeling guilt over every mouthful. Jon Reiner's magnificent and devastating memoir, The Man Who Couldn't Eat, accomplished the impossible. It made me shut up and enjoy my food.” —Ayelet Waldman, author of Red Hook Road

“Reiner is such a vivid writer that this first-person account of a food lover’s descent into hell is, at turns, gripping, horrifying, excruciating and, ultimately, redeeming.” —Karen Page and Andrew Dornenburg, James Beard Award-winning authors of The Flavor Bible and The Food Lover's Guide to Wine

“Reiner writes a horrendously funny account of his condition in which food is his mortal enemy. He is the Olympian of a modern truth—our daily bread has it in for us—and his book hits the mark.” —Lore Segal, author of Her First American and Shakespeare's Kitchen