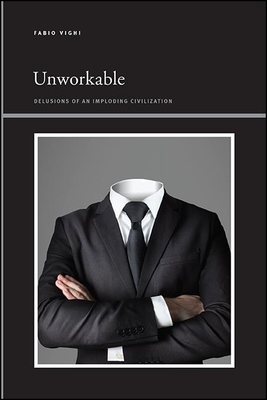 
Not On Our Shelves—Ships in 1-5 Days
(This book cannot be returned.)
Unworkable discusses the ongoing implosion of our globalized world from three distinct angles: the capitalist elimination of labor through technological automation, the dissolution of our shared social narratives, and the subtle imposition of an increasingly pervasive ideological order. Aiming to root out the lost cause of this implosion, Fabio Vighi returns to Marx by way of Hegel, Lacan, Gorz, Baudrillard, and other thinkers who, in different ways, have reflected on the complex dialectical structure of modernity and its hidden conditions of possibility. Capitalism, Vighi argues, fundamentally redefined the meaning of work and prevented the emergence of alternative forms of life. In our own time, the delusions of work and the values that propel life under capitalism have become, in Vighi's analysis, unworkable. And yet, even as we become an increasingly workless society, we continue to abide by the same laws of productivity and profit.
Fabio Vighi is Professor of Italian and Critical Theory at Cardiff University. He is the coauthor (with Heiko Feldner) of Critical Theory and the Crisis of Contemporary Capitalism.