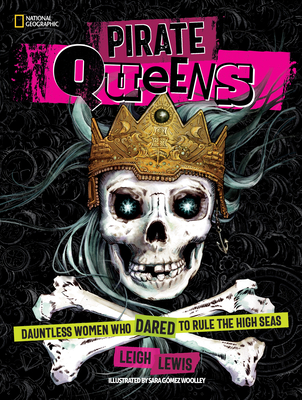 
On Our Shelves Now at:
This wow-worthy book proves that women have been making their mark in all aspects of history—even the high seas!

Meet Ching Shih, a Chinese pirate who presided over a fleet of 80,000 men (by contrast, Blackbeard had some 300). Get the scoop on Anne Bonny who famously ran away from an arranged marriage to don trousers and brandish a pistol in the Bahamas. And there are more!

Each pirate profile includes a dramatic original poem presented against a backdrop of gorgeous full-color art by award-winning illustrator Sara Gómez Woolley. Each profile is followed by fascinating information about the real life and times of these daring (and dangerous!) women.

Vetted by the world’s leading pirate experts and historians, this book is a cool and edgy gift. It’s also perfect for any curious kid who dreams of adventure and for parents who are eager to show their tweens and teens that history is more diverse, daring, and surprising than what is typically found in textbooks.

LEIGH LEWIS is a children's writer and poet who has been "playing pirates" since she could walk. She does her best work in loud cafes, on long journeys, or in bed, late at night while everyone else sleeps. Her adventures on the high seas have enabled her to call many places "home," including Turkey, Greece, England, and Russia, as well as cities all over the United States. Eventually, Lewis navigated her way back to her hometown of Columbus, Ohio, where she spends her time dreaming up stories for kids of all ages.

SARA GÓMEZ WOOLLEY is an award-winning children's book illustrator whose clients include Scholastic, Random House, and more. Her recent children's book, Charlotte and the Quiet Place, received a Foreword Reviews 2015 Book of the Year Gold Medal, an IPPY Award Silver Medal, and has been featured in Creative Quarterly's Journal of Art & Design.