The Wisdom of Wolves: Lessons From the Sawtooth Pack (Paperback) 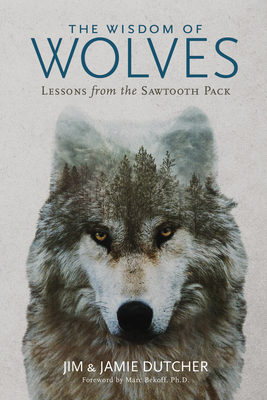 The Wisdom of Wolves: Lessons From the Sawtooth Pack (Paperback)


Not On Our Shelves—Ships in 1-5 Days
For six years Jim and Jamie Dutcher lived intimately with a pack of wolves, gaining their trust as no one has before. In this book the Dutchers reflect on the virtues they observed in wolf society and behavior. Each chapter exemplifies a principle, such as kindness, teamwork, playfulness, respect, curiosity, and compassion. Their heartfelt stories combine into a thought-provoking meditation on the values shared between the human and the animal world. Occasional photographs bring the wolves and their behaviors into absorbing focus.
For more than 20 years, JIM and JAMIE DUTCHER have been documenting wolf behavior. For six years they lived in a camp near Idaho's Sawtooth Wilderness, intimately observing a three-generation wolf pack. Their unprecedented experiences resulted in prime-time documentaries that won three Emmys. They live in Ketchum, Idaho.