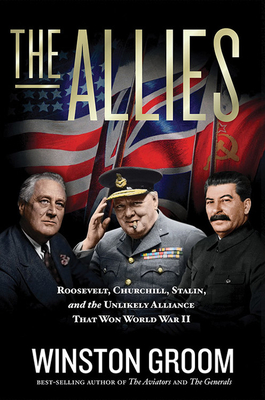 By the end of World War II, 59 nations were arrayed against the axis powers, but three great Allied leaders--Franklin Roosevelt, Winston Churchill, and Joseph Stalin--had emerged to control the war in Europe and the Pacific. Vastly different in upbringing and political beliefs, they were not always in agreement--or even on good terms. But, often led by Churchill's enduring spirit, in the end these three men changed the course of history. Using the remarkable letters between the three world leaders, enriching narrative details of their personal lives, and riveting tales of battles won and lost, best-selling historian Winston Groom returns to share one of the biggest stories of the 20th century: The interwoven and remarkable tale, and a fascinating study of leadership styles, of three world leaders who fought the largest war in history.
WINSTON GROOM was born in Washington, D.C., but grew up in Mobile, Alabama, on the Gulf Coast. After a brief period in the Army, Groom returned to Washington, where he worked as a reporter at the now defunct Washington Star, covering the political and court beat. He enjoyed a stint in New York City socializing with literary legends before returning to Alabama, where he settled down to writing and enjoying life. He is the author of 18 previous books, including Forrest Gump, turned into an Oscar-winning movie, The Generals, and The Aviators.
"...one of America’s great storytellers, Winston Groom paints a vivid portrait of men caught between the vise jaws of military necessity and political reality. Anecdotes about their personal lives, such as Stalin’s tumultuous family relationships and FDR’s struggle with polio, bring color to leaders we remember through black-and white photographs and newsreels. Churchill is a character tailor-made for Mr. Groom’s style, and he captures the English lion’s genius for inspiration in bold, beautiful strokes... It is the writing that gives “The Allies” its elemental charm. At its best, Mr. Groom tells an enthralling story of three nations, each wary of the others, and of three men who set aside deep differences for a common cause." –The Wall Street Journal

“Groom brings his experience as both novelist and historian to bear in this well-researched and fast-paced narrative of the complex relationship among the three statesmen who determined the outcome of WWII…This is an excellent history.” –Publishers Weekly

“Novelist and historian Groom recounts the origins and fortunes of the grand alliance forged to battle the Axis powers in World War II.” –Kirkus

"Military historian (The Generals) and fiction writer Groom (Forrest Gump) presents an accessible work about the “Big Three” of World War II: Winston Churchill, Franklin D. Roosevelt, and Joseph Stalin. According to the author, who cites well-regarded secondary sources throughout this readable history, it was the brutal international conflict that led to this triumvirate rather than the compatibility of their personalities." –Library Journal

"Knowledge of the Second World War and an understanding of the role played by the dominant personalities who shaped the war are fading from memory. For some, the war and its leaders are ancient history. Winston Groom’s The Allies will hopefully help a new generation learn about the heroics, the horrors, and the tragedies of World War II." –NY Journal of Books

"Novelist and historian Groom recounts the origins and fortunes of the grand alliance forged to battle the Axis powers in World War II." –Crossville Chronicle, Tennessee

“Groom excels at capturing the flow of influence to action.” –Birmingham News

"A superb history of the three leaders who guided the world during WWII: Franklin Roosevelt,  Winston Churchill and Joseph Stalin. Not only did these three political giants direct the strategy of the war, they contributed to the future direction of the world by decisions made at the war’s conclusion. Although I have read books and viewed movies that detailed specific battles and places, Groom did a lovely job weaving a story that pulled the events together into a broad perspective which I thoroughly enjoyed. And as I have come to expect in all his histories, the anecdotes were fascinating and I learned new details about the characters and the events in play. A powerful story!"
–Page and Palette

“That unholy marriage of convenience between the Americans and British and the Soviets against their common enemy, Nazi Germany, certainly changed the course of the war and all-but sealed Hitler’s fate. And it is a well-known one, which Groom tells well for a general audience.”
–Vietnam Veterans of America

"I particularly enjoyed how Groom presented the information in a nonchalant sort of way. He painted these figures as men, rather than mythical beings, with faults, and secrets, and personal agendas, which humanized them for me. Also, Groom really hits home the fact that the only reason these three men came together was to oppose fascism, given their clear political points of difference." - The Paperback Pilgrim

“It reminded me of why I adore history so much.” –Instagram: @giuliland

“Groom manages to bring his skill as a historian and his magical novelist powers together to create an astoundingly brilliant historical compilation of one of my personal favorite time periods.” –I Write in Books blog

“I really appreciated the way this book was laid out. The book starts out describing each of the men's upbringings and childhoods. Then it goes on to describe how they came to power. Lastly, it describes how they came to become Allies…perfect for someone who wants to get an in-depth knowledge of these three men, but don't want to read separate books. I love reading historical fiction about WWII and this book really added to my knowledge base.” –Instagram: @crystal_clears_the_shelves

“I was impressed with the level of detail and connections that were provided throughout this book. Groom has captured the spirit of a biography in the context of an event, and effectively knit three lives together in one book.” –Literary Quicksand

“The author doesn’t just write history, he tells a story by giving us a history of each leader and what made them. Afterwards, the reader gets to learn how these three great personalities managed to synergy and find common ground (hating Nazis was a big one).” –Man of La Book