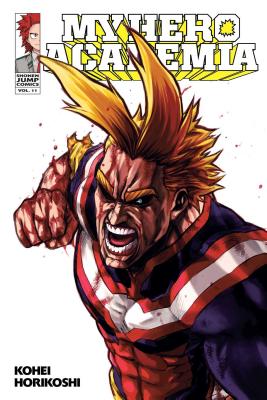 This is book number 11 in the My Hero Academia series.

Bakugo’s abduction by the League of Villains was a carefully calculated move designed to draw out the heroes—All Might in particular—and destroy them. Midoriya and his friends set out on a rescue mission that eventually pulls in not only All Might but also several other heroes! The casualties mount, until at last the mastermind of the plot appears—All for One, the only villain powerful enough to take on All Might head-to-head and possibly win!
Kohei Horikoshi was born in Aichi, Japan, in 1986. He received a Tezuka Award Honorable Mention in 2006, and after publishing several short stories in Akamaru Jump, his first serialized work in Weekly Shonen Jump was Oumagadoki Zoo in 2010. My Hero Academia is his third series in Weekly Shonen Jump.