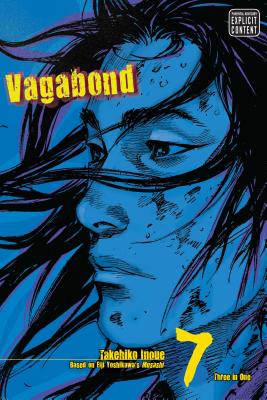 This is book number 7 in the Vagabond VIZBIG Edition series.

In the aftermath of the bloody Battle of Sekigahara, Sasaki Kojirō, the man destined to be Musashi's opponent in the most famous duel in Japanese history, finds himself alone amidst desperate refugees and vicious hunters. Despite being pushed to his limits, Kojirō is far from daunted by his peril and instead thrives with an almost supernatural serenity. Driven by his macabre thirst for battle, Kojirō is transformed into the ultimate swordsman.
Takehiko Inoue is the creator of one of the most popular manga of all time, Slam Dunk, which has sold over 100 million copies worldwide. He followed that series up with two titles lauded by critics and fans alike—Vagabond, a fictional account of the life of Miyamoto Musashi, and Real, a manga about wheelchair basketball. Inoue is the recipient of numerous awards, including the prestigious Tezuka Osamu Culture Award and the Media Arts Festival Award. In addition to his work on manga, Inoue has worked on television commercials, character designs for video games, and is the founder of a scholarship to foster Japanese basketball talent.