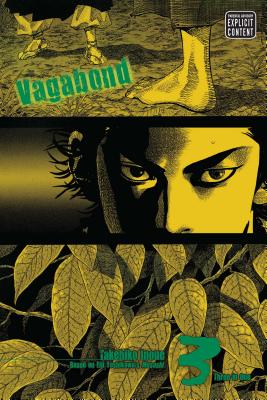 This is book number 3 in the Vagabond VIZBIG Edition series.

Musashi suffers a humiliating defeat against Inshun, the second-generation master of Hōzōin Temple. To prepare for a rematch, Musashi undertakes an intense spiritual and physical training regimen with a most unlikely teacher--Inshun's predecessor, the founder of the Hōzōin Spear Technique. To attain the focus necessary to take on the most technically proficient and deadliest fighter he has ever faced, Musashi will first have to confront his own deep-seated personal demons.
Takehiko Inoue is the creator of one of the most popular manga of all time, Slam Dunk, which has sold over 100 million copies worldwide. He followed that series up with two titles lauded by critics and fans alike—Vagabond, a fictional account of the life of Miyamoto Musashi, and Real, a manga about wheelchair basketball. Inoue is the recipient of numerous awards, including the prestigious Tezuka Osamu Culture Award and the Media Arts Festival Award. In addition to his work on manga, Inoue has worked on television commercials, character designs for video games, and is the founder of a scholarship to foster Japanese basketball talent.