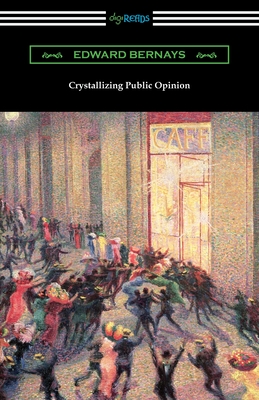 "Crystallizing Public Opinion" is Edward Bernays' pioneering work on the topic of public relations. Published in 1923, this groundbreaking book laid the foundation for the modern method of mass persuasion through media and advertising. Sometimes referred to as father of public relations, Bernays was one of the most influential Americans of the 20th century. He aimed his insightful advice at governments and corporations who wished to build support or spread a particular message. Bernays related his own experiences as a public relations counsel to numerous organizations, such as helping Lithuania bolster its national identity by spreading positive information about Lithuania to intellectuals, sports fans, and politicians, who in turn would influence others. Bernays recognized the increasing importance of public perception as a matter of interest to both official organizations and private companies. He combined a study of individual human psychology and group identity with an understanding of symbolism and media. Bernays was the first to recognize that to effectively guide public opinion, organizations must control and carefully time the dissemination of their news rather than merely reacting to what is being said by others. "Crystallizing Public Opinion" remains a fascinating and hugely important work in understanding public perception and opinion. This edition is printed on premium acid-free paper.