M Is for Monster (Hardcover) 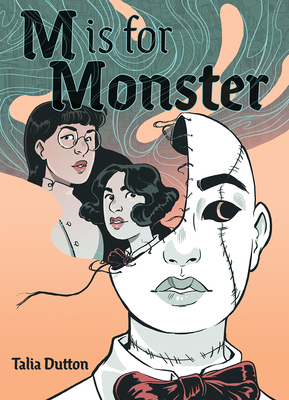 M Is for Monster (Hardcover)


Not On Our Shelves—Ships in 1-5 Days
A scientist attempts to bring her younger sister back to life with unexpected results in this Frankenstein-inspired graphic novel about ghosts, identity, and family

When Doctor Frances Ai’s younger sister Maura died in a tragic accident six months ago, Frances swore she would bring her back to life. However, the creature that rises from the slab is clearly not Maura. This girl, who chooses the name “M,” doesn’t remember anything about Maura's life and just wants to be her own person. However, Frances expects M to pursue the same path that Maura had been on—applying to college to become a scientist—and continue the plans she and Maura shared. Hoping to trigger Maura’s memories, Frances surrounds M with the trappings of Maura’s past, but M wants nothing to do with Frances’ attempts to change her into something she’s not.
In order to face the future, both Frances and M need to learn to listen and let go of Maura once and for all. Talia Dutton’s debut graphic novel, M Is for Monster, takes a hard look at what it means to live up to other people’s expectations—as well as our own.

M Is for Monster is one of the titles on our Surely list which is dedicated to showcasing gay, lesbian, bisexual, transgender, queer, intersex, and asexual creators and stories.
Talia Dutton is a queer, biracial Asian cartoonist and illustrator. A firm believer in the intersection of art and play, Dutton creates introspective comics about monsters and humanity, trying to find the humor and warmth of the mundane in the fantastical. She received a BA from Brown University in 2018 and an MFA in comics from California College of the Arts in 2020. She lives in Los Angeles, where she waits patiently for the love of her sister’s hamster, Boba McBumster.
"M is for Monster is sweet and emotional, builds a complete world of magic and science very elegantly, and has so much to say about identity and grief. I really resonated with the story of trying to be someone you're not in order to be loved, and the idea of a created monster finding herself is such a beautiful way to explore it. Also, the art is just gorgeous. SO well done!"
— Molly Knox Ostertag, author of The Witch Boy and The Girl from the Sea