Legends of Drag: Queens of a Certain Age (Hardcover) 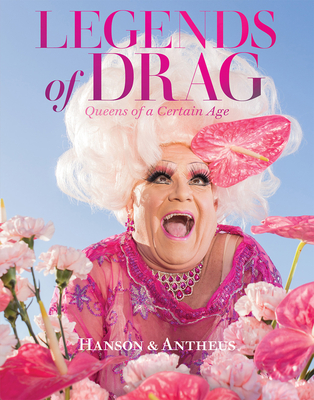 Legends of Drag: Queens of a Certain Age (Hardcover)


On Our Shelves Now at:
A tribute to the groundbreaking drag icons who helped pave the way for the queens of today

Drag has officially transcended the underground and exploded into the mainstream. Queens have more visibility than ever, and it’s been hard won through decades of perseverance, imagination, and intergenerational support within local drag communities. It’s time to honor the queens who paved the way for the new generation of drag and are still carrying out their work today.

To create Legends of Drag, a photo book and archive of living drag history, authors Harry James Hanson and Devin Antheus traveled coast to coast, visiting 16 cities to meet 80 legendary entertainers who shared boundless wisdom and powerful anecdotes from their lives. These queens are featured in stunning portraits shot on location and styled with unique floral elements.
Harry James Hanson is an artist, creative director, and lifelong drag performer based in Brooklyn. Their work spans the fine art, commercial, and editorial worlds, driven by a desire to tell beautiful stories and collaborate with other artists. Hanson’s photography has been published in the New York Times, Vogue, Harper’s Bazaar, Dazed, PAPER, New York magazine, and Rolling Stone. Devin Antheus is a floral stylist, spirit worker, and writer living in San Francisco. They are a devotee of the Goddess Flora, a founder of the Temple of Dionysos, and the Thiasos of the Flowering Branch. They teach classes on floral design, Mediterranean mystery traditions, and queer spiritualities. Their writing has been published in Vogue, Harper’s Bazaar, the New Inquiry, and Co—Star Astrology Society. They are an editor-at-large for Contagion Press. Prelude and Foreword written by fashion icon Miss J Alexander and drag superstar Sasha Velour.
“Harry James Hanson and Devin Antheus's beautifully designed photography book, Legends of Drag, is a tribute to 79 legendary drag elders who paved the way for the new generation of drag . . . The subjects of these profiles are both inspiring and funny.”
—Shelf Awareness *starred* review

“Through its attention to archiving drag history and capturing the precious and fleeting moments with our queer elders, Legends of Drag will go down in history itself. It is essential reading, and in this day and age, when LGBTQ+ literature, chronicles, and history are being banned, this book is more important than ever.”—Bust Magazine

“Legends of Drag: Queens of a Certain Age grabs and brings your heart along for a wildly beautiful ride with the descriptions of Devin and Harry's time with these queens. The documentation and retelling of this journey is profoundly important work, and this book understands that through and through.”
—Bleeding Cool