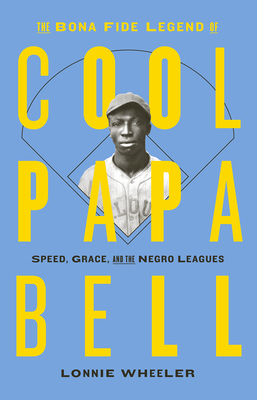 James “Cool Papa” Bell was a legend in Black baseball, a lightning fast switch hitter elected to the National Baseball Hall of Fame in 1974. Bell's speed was extraordinary; as Satchel Paige famously quipped, he was so fast he could flip a light switch and be in bed before the room got dark.

In The Bona Fide Legend of Cool Papa Bell, experienced baseball writer and historian Lonnie Wheeler recounts the life of this extraordinary player, a key member of some of the greatest Negro League teams in history. Born to sharecroppers in Mississippi, Bell was part of the Great Migration, and in St. Louis, baseball saved Bell from a life working in slaughterhouses. Wheeler charts Bell’s ups and downs in life and in baseball, in the United States, the Dominican Republic, and Mexico, where he went to escape American racism and MLB’s color line. Rich in context and suffused in myth, this is a treat for fans of baseball history.

Lonnie Wheeler (1952-2020) was the author or co-author of many books on baseball including I Had a Hammer with Hank Aaron, Pitch by Pitch with Bob Gibson, Sixty Feet, Six Inches, with Bob Gibson and Reggie Jackson, Long Shot with Mike Piazza, Bleachers: A Summer in Wrigley Field, and Intangiball, winner of a 2016 SABR Baseball Research Award.
“Lonnie Wheeler's bio of Cool Papa Bell reads like fiction. That's a tribute to Bell's achievements, which are worthy of legend, and to Wheeler's spellbinding writing and extraordinary ability to sift fact from myth. The only tragedy is that Lonnie isn't here to enjoy the stream of accolades this book is sure to generate.”
— author of Satchel: The Life and Times of an American Legend

“To white baseball fans in his day, Cool Papa Bell was an invisible man at an invisible time. The virtual embodiment of the Negro Leagues, he is honored by Lonnie Wheeler’s last, great biography—the portrait of a man and an age only now beginning to be seen by us all.”
— official historian of Major League Baseball

"?A book for baseball history buffs receives a stellar, 4.5 out of 5 from Papa Clicker."
— Andrew Marchand

“This is a fantastic story for all baseball fans and contains legends and lore you won’t want to miss. – The 25 Best Sports Books of All Time!”
— SPY.com

“This book, written for adults but appropriate for upper middle grade readers, is a terrific biography about James “Cool Papa” Bell (1903–1991), a legend in Black baseball.”
— BookRiot

“Illuminating . . .  a richly detailed account of possibly the speediest player in history, and, along the way, a fascinating picture of Black baseball in the Jim Crow era.”
— The Washington Post