The Prisoner of Shiverstone (Paperback) 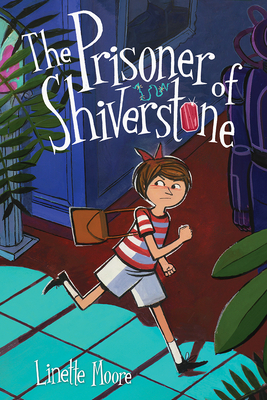 The Prisoner of Shiverstone (Paperback)


On Our Shelves Now at:
A positively ingenious story about a mysterious island, long-lost secrets, and a young girl’s quest in the world of mad science!

In Linette Moore’s debut, middle-grade graphic novel, The Prisoner of Shiverstone, eleven-year-old Helga Sharp is found unconscious in a drifting rowboat near the coast of Utley Island. Utley, as Helga finds out when she awakens in the hospital, is forbidden territory: it’s a prison island to which the Mainland has exiled troublesome mad scientists for generations. Helga is questioned by the island’s guards and though they’re suspicious of her story, they agree to let her stay until they find her family.

The truth is, it’s no accident that Helga landed here. She is a keen inventor, but the Mainland is suspicious of all scientists and inventors. While working on her projects in secret, Helga made radio contact with Erasmus Lope, a mad genius who everyone thought  had died in a lab experiment gone spectacularly wrong. But Lope is alive, and Helga is on a mission to rescue him from the prison island.

Now Helga must find a way to break Lope out, right under the noses of the family of famous heroes that run Utley Island. There’s only one big problem—Lope’s trapped inside a giant crystal in the mad scientists’ museum!

Fans of Red’s Planet and Suee and the Shadow are sure to love The Prisoner of Shiverstone, a charismatically illustrated mad science adventure for readers of all ages.

Linette Moore is a painter and cartoonist based in Massachusetts. She works primarily in gouache and watercolor on paper. Her work has appeared in the New York Times, TheNib, and Popula, among other places. Her Instagram and Twitter accounts are at @ohtiniestplanet, and her portfolio can be viewed at ohtiniestplanet.com.

Linette Moore is a painter and cartoonist based in Massachusetts. She works primarily in gouache and watercolor on paper. Her work has appeared in the New York Times, TheNib, and Popula, among other places. Her Instagram and Twitter accounts are at @ohtiniestplanet, and her portfolio can be viewed at ohtiniestplanet.com.
**STARRED REVIEW**
"The quirky characters and inventive world-building are largely products of the cartoonish style of the gouache and watercolor illustrations, while the composition and layout of the comic panels help the outlandish plot zip along. This delightful confection will entice readers with a good mix of fantasy, mystery, and action."
— The Horn Book Magazine

**STARRED REVIEW**
"Moore's debut is an exciting entry in the world of middle-grade graphic novels, thanks to her unusual art style—her gorgeous watercolors in saturated tones have an appealing vintage look to match the story about a vibrant girl who dreams big. . .The focus on inventions will make this a nice STEAM crossover title, but the sci-fi story should have wide appeal among middle-grade comics fans."

"This is a delightful, fast-paced read starring a protagonist whose love of science and adventure is at odds with societal expectations. Moore’s background as a painter and cartoonist shines through in the sharp, angular art; character designs, especially some of the expressions, are reminiscent of classic newspaper comics."
— School Library Journal