The People's Painter: How Ben Shahn Fought for Justice with Art (Hardcover) 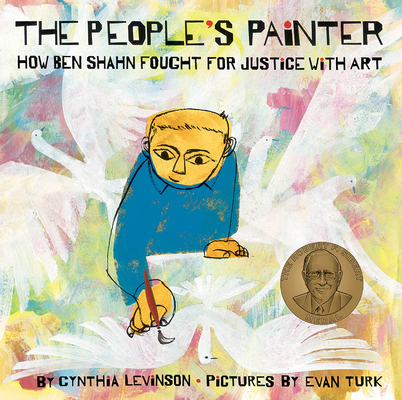 The People's Painter: How Ben Shahn Fought for Justice with Art (Hardcover)

“The first thing I can remember,” Ben said, “I drew.”
As an observant child growing up in Lithuania, Ben Shahn yearns to draw everything he sees—and, after seeing his father banished by the Czar for demanding workers’ rights, he develops a keen sense of justice, too.
So when Ben and the rest of his family make their way to America, Ben brings both his sharp artistic eye and his desire to fight for what’s right. As he grows, he speaks for justice through his art—by disarming classmates who bully him because he’s Jewish, by defying his teachers’ insistence that he paint beautiful landscapes rather than true stories, by urging the US government to pass Depression-era laws to help people find food and jobs.
In this moving and timely portrait, award-winning author Cynthia Levinson and illustrator Evan Turk honor an artist, immigrant, and activist whose work still resonates today: a true painter for the people.

Since she doesn’t draw or paint, Cynthia Levinson tells true stories about brave people, like Ben Shahn, and the injustices they’ve faced through words. She loves doing research, which has allowed her not only to visit Shahn’s studio but also to walk with soldiers of the civil rights movement, fall off a tightwire, and read letters in a condemned building surrounded by police tape. Cynthia’s books for young readers have won many awards. She lives in Austin and Boston. Evan Turk is an Ezra Jack Keats Book Award–winning illustrator, author, and animator. He is the author-illustrator of The Storyteller, You are Home: An Ode to the National Parks, and A Thousand Glass Flowers. He also illustrated Grandfather Gandhi and Muddy, a NYT Best Illustrated Children’s Book. Originally from Colorado, Evan now lives in the Hudson River Valley with his husband and two cats. He is a graduate of Parsons School of Design and continues his studies through Dalvero Academy.
**STARRED REVIEW**
"Turk’s expressive paintings with exaggerated features evoke the spirit of Shahn and the artist’s depictions of the immigrant experience, working people, and protests. . . A thoughtful introduction to this social justice artist." —Booklist

**STARRED REVIEW**
"Levinson’s text moves in a smooth, accessible flow. Turk, a professed devotee of Shahn’s work, is quite possibly the ideal illustrator for this title. . . A marvelous spur to kids beginning to consider the way art can be political."—Bulletin of the Center for Children's Books

**STARRED REVIEW**
"Well-researched and-sourced, this is a valuable addition to the canon of artist biographies.This life of an artist with a social conscience makes itself heard." —Kirkus Reviews