Marvel Alphablock (An Abrams Block Book): The Marvel Cinematic Universe from A to Z (Board book) 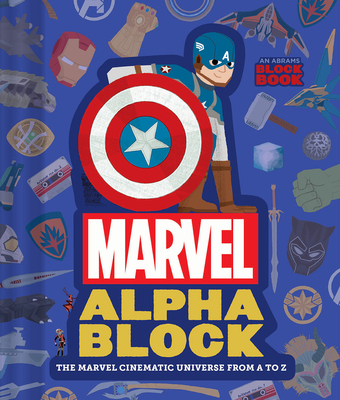 Marvel Alphablock (An Abrams Block Book): The Marvel Cinematic Universe from A to Z (Board book)


On Our Shelves Now at:
The Marvel Cinematic Universe is rich with content, from its highly original characters to its stunning locations. This new title in the Abrams Block Book series features thrilling scenes and fascinating characters from A to Z, perfect for the youngest fan as well as seasoned collectors. As in previous Block Book titles, Marvel Alphablock includes die-cut pages and the stylish art of British design team Peskimo. Each spread highlights important characters every fan of the Marvel Cinematic Universe should know—from Black Panther to Iron Man to Scarlet Witch.

Christopher Franceschelli is a seasoned publisher, editor, and creator of children’s books. He currently runs Chronicle’s Handprint imprint and the SmartInk packaging company. A born and raised New Yorker, Franceschelli lives with his family in Brooklyn. David Partington is an illustrator based in Bristol, UK. His influences range from mid-century design to Saturday morning cartoons. As part of Peski Studio (formerly Peskimo) he enjoys screen printing, a process which often informs his approach to illustration. David’s work can be seen in kids’ books, food packaging, and jumbo floor puzzles around the world. He especially enjoys creating characters, drawing friendly robots, and sending them on incredible adventures.