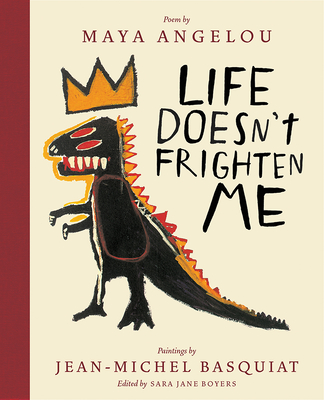 Maya Angelou's brave, defiant poem celebrates the courage within each of us, young and old. From the scary thought of panthers in the park to the unsettling scene of a new classroom, fearsome images are summoned and dispelled by the power of faith in ourselves.

Angelou's strong words are matched by the daring vision of artist Jean-Michel Basquiat, whose childlike style reveals the powerful emotions and fanciful imaginings of childhood. Together, Angelou's words and Basquiat's paintings create a place where every child, indeed every person, may experience his or her own fearlessness.

This brilliant introduction to poetry and contemporary art features brief biographies of Angelou and Basquiat and an afterword from the editor. A selected bibliography of Angelou's books and a selected museum listing of Basquiat's works open the door to further inspiration through the fine arts.
The beloved poet Maya Angelou was, among other things, a novelist, playwright, actress, dancer, and civil rights activist. Artist Jean-Michel Basquiat was born in Brooklyn, New York, of Haitian and Puerto Rican parents. His first artistic expressions were created and enjoyed as urban street art. His art is exhibited in over a dozen museums around the world, including the MoMA, the Met, and the Whitney.

A California-based writer/editor, internationally exhibiting fine art photographer, and former music industry attorney and artist manager, Sara Jane Boyers has returned to the world of children’s publishing with a series of photo-illustrated book projects. Her focus remains on the arts with a bit of social activism thrown in, starting with her award-winning Life Doesn’t Frighten Me, now celebrating twenty-five years in publication.
"Presented as an impassioned ode to courage, the late poet Dr. Maya Angelou's 1993 poem returns in a handsome 25th-anniversary edition to inspire a new generation of brave readers."
— Shelf Awareness

"A unique book that combines the words of a renowned African-American poet laureate and the primitive, modern paintings of a young Haitian-American artist. . . A powerful exploration of emotion and its expression through the careful blend of words and art."
— School Library Journal

"Both a handsome art book and a rhythmic read-aloud, this is great for sharing with audiences of many ages."
— Booklist

"Boyers, a TV producer and art collector, deserves a standing ovation for her performance in pairing Angelou's poem with abstract paintings by the late Basquiat."
— Publisher's Weekly