Barbed Wire Baseball: How One Man Brought Hope to the Japanese Internment Camps of WWII (Paperback) 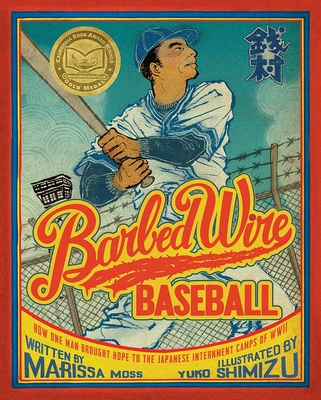 Barbed Wire Baseball: How One Man Brought Hope to the Japanese Internment Camps of WWII (Paperback)


Not On Our Shelves—Ships in 1-5 Days
A true story set in a Japanese-American internment camp in World War II. As a young boy, Kenichi Zenimura (Zeni) wanted to be a baseball player, even though everyone told him he was too small. He grew up to become a successful athlete, playing with Babe Ruth and Lou Gehrig. But when the Japanese attacked Pearl Harbor in 1941, Zeni and his family were sent to one of several internment camps established in the U.S. for people of Japanese ancestry. Zeni brought the game of baseball to the camp, along with a sense of hope, and became known as the “Father of Japanese-American Baseball.”

Marissa Moss is the bestselling author of the Amelia series, Barbed Wire Baseball, and Nurse, Soldier, Spy. She lives in Berkeley, California.

Yuko Shimizu is an illustrator and comics artist best known for the cover of the graphic-novel adaptation of Neil Gaiman’s The Sandman: The Dream Hunters. She lives in New York City. yukoart.com.