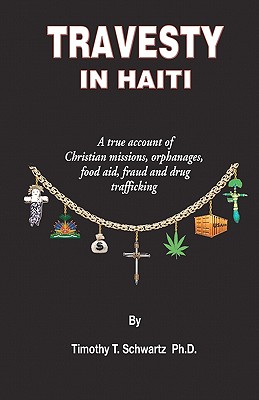 
Not On Our Shelves—Ships in 1-5 Days
(This book cannot be returned.)
TRAVESTY is an anthropologist's personal story of working with foreign aid agencies and discovering that fraud, greed, corruption, apathy, and political agendas permeate the industry. It is a story of failed agricultural, health and credit projects; violent struggles for control over foreign aid; corrupt orphanage owners, pastors, and missionaries; the nepotistic manipulation of research funds; economically counterproductive food aid distribution programs that undermine the Haitian agricultural economy; disastrous social engineering by foreign governments, international financial and development organizations--such as the World Bank and USAID-- and the multinational corporate charities that have sprung up in their service, CARE International, Catholic Relief Services, World Vision, and the dozens of other massive charities that have programs spread across the globe, moving in response not only to disasters and need, but political agendas and economic opportunity. TRAVESTY also chronicles the lives of Haitians and describes how political disillusionment sometimes ignites explosive mob rage among peasants frustrated with the foreign aid organizations, governments and international agencies that fund them. TRAVESTY recounts how some Haitians use whatever means possible try to better their living standards, most recently drug trafficking, and in doing so explains why at the service of international narcotraffickers and Haitian money laundering elites, Haiti has become a failed State. TRAVESTY reads like a novel. It takes the reader from the bowels of foreign aid in the field; to the posh and orderly urban headquarters of charities such as CARE International; to the cold, distant heights of Capitol Hill policy planners. The journey is marked by true accounts involving violence, corruption, appalling greed, sexual exploitation, disastrous social engineering, and the inside world of drug traffickers. But TRAVESTY it is not a novel. It is founded on 15 years of academic and field experience, research, and hard data. It entertains the reader with vivid first hand accounts while treating seriously the problems inherent not only in international aid, but the sabotaging effects of the drug war on economic development in remote and impoverished areas of the hemisphere.